The Hokkaido Museum “Mori no Charenga” is a prefectural museum that was opened to the public on April 18, 2015. It houses a main exhibition hall with a comprehensive collection of the museum introducing the changes in Hokkaido from 1.2 million years ago to the present day based on five themes. The museum also features Discovery Square to provide visitors an opportunity to experience the wonder of nature and the wisdom of ancient people and to learn while having fun.

The Hokkaido Museum is located in Nopporo Forest Park, a prefectural natural park, which is home to Hokkaido squirrels, black woodpeckers and other rare wildlife. Along with the Historical Village of Hokkaido, an outdoor museum where buildings and houses of the frontier period of Hokkaido have been relocated and restored, and the Nopporo Forest Park Visitors’ Center in the vicinity, the area surrounding the museum creates a space for people of all ages to enjoy the nature, history and culture unique to Hokkaido.

Although Hokkaido is the northernmost prefecture of Japan, it might have been the south end for animals that were migrating from the north back in primordial times.

Walking on a huge satellite image of Japan upon entering the museum gives one a new perspective on this country that cannot be seen from the ordinary map we usually use. When one looks up, two elephants are facing each other, and one realizes that Hokkaido is the place where creatures and cultures from the north and the south met each other. Rare Naumann’s elephant fossils discovered in Churui are also displayed. 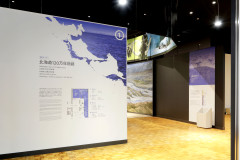 The first theme for the exhibition introduces the history of the island of Hokkaido and the local people from approximately 1.2 million years ago to the end of the 19th century, when land reclamation commenced full scale in Hokkaido.

Exhibits include mammoths and Naumann’s elephants, features of the Paleolithic culture and the Jomon culture in northern Japan, the bearers of Okhotsk and Satsumon cultures, trading by Ainu people, and pioneers who moved from Honshu and other southern islands to Hokkaido. Situated in northeast Asia, Hokkaido was the place where a variety of animals, people and goods from north and south came and went, and where they met each other. In such a geographical setting, the unique history and culture of Hokkaido were created.

[Second Theme] The Culture and Recent History of the Ainu
An original animation screened for the first time!

The Ainu people who lived in Hokkaido, Sakhalin and the Kurile Islands developed various forms of their culture. However, the lifestyle and culture of the Ainu people were particularly impacted when Japan, Russia and other countries tried to advance into northeast Asia, and Japan took control of Hokkaido and promoted land reclamation there.

As the second theme, the current situation of the Ainu people is featured, and Ainu culture including their lifestyle, tools, religion, stories, and songs that have been passed down through the generations, are introduced. The world of Ainu culture is created by capturing the Ainu people living in modern-day society. 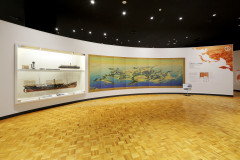 A bird’s-eye view map of Hokkaido drawn by Hatsusaburo Yoshida in the early Showa era welcomes visitors. The map helps visitors to picture scenes from the history of Hokkaido, which has developed into what it is today after going through drastic changes since the beginning of the Meiji era.

Hokkaido has distinctive features, such as unique landscapes, both sea- and land-based manufacturing industries, and a snow-resistant lifestyle. The third theme for the exhibition allows visitors to explore Hokkaido’s history while following the footsteps of Hokkaido’s industries and lifestyle.

[Fourth Theme] Towards Our Time
Let’s talks about Hokkaido during the 20th century! 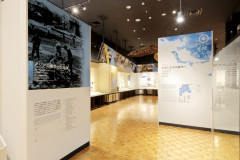 The fourth theme of this exhibition covers the development of Hokkaido from the beginning of the 20th century to the present day.

During this period, Hokkaido has often experienced major changes in terms of politics, economy and lifestyle. Such changes have shaped today’s Hokkaido and people. By reviewing past incidents in chronological order, visitors will learn what those turbulent days were like, and how the people lived in those days.

It is up to us to shape the future of Hokkaido. By learning from the past, we will explore the possibilities of the future taking diverse values, opinions and efforts into consideration. 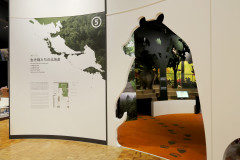 The natural environment in Hokkaido has undergone more rapid change than anywhere else in the country within a short period of one hundred and several tens of years since the beginning of the Meiji era. Even so, Hokkaido still has diverse natural surroundings, where a variety of creatures live while interacting with each other in various ways such as predator-prey relationships. Such interactions also affect humans.

The fifth theme for the exhibition allows visitors to observe the current state of the nature in Hokkaido and the connections between creatures that live there from the viewpoints of brown bears, Hokkaido sika deer, salmon and other wildlife. In this context, explore the future relationships between humans and the natural world.