Special winter clothes were indispensable to survive the snowy, cold winters in Hokkaido. In the southern parts of Hokkaido, cotton clothes, which had been obtained through trading since the Edo period, were used, and some winter clothes were designed to protect against the cold in various ways, for example by painstakingly stitching many layers together with cotton thread. After the Meiji era, foreign-made woolen fabrics such as red blankets (called aka-getto) and cotton flannel were introduced, and Japanese and Western styles were also blended, for example by wearing a dress shirt and kimono together.

It was severely cold during the herring fishing season in early spring. To protect against the cold, fishermen wore triangular black flannel furoshiki (pieces of cloth usually used to wrap things for carrying) on their heads or they used twisted towels as headbands, and they also wore cotton undershirts and donza (quilted long coats) for the upper body and long underpants for the lower body.

Donza, which is seen in various parts of Japan, is also called donja, tsuzure, sashiko or mojiri. It is a quilted working coat that is sturdy and excellent at retaining heat and waterproofing. It is said that it took more than 20 days to complete one donza because it was made by elaborately stitching many layers of plain dark blue cotton fabric together with cotton thread. During the winter, before the start of the herring fishing season, housewives busily made donza by hand, sitting at the fireplace.

Most settlers who had been engaged in cultivating farm lands since the Meiji era wore short working clothes called koshikiri or mijika, combined with tatsuke or other types of long underpants. These working clothes were mostly sashiko (quilted clothes) that helped to protect them against the cold and against injuries due to cultivating work on the lands filled with short striped bamboo and shrubs. Settlers wore tabi (socks with split toes), also called kaitaku-tabi that were made by stitching many layers of thick cotton cloth together. 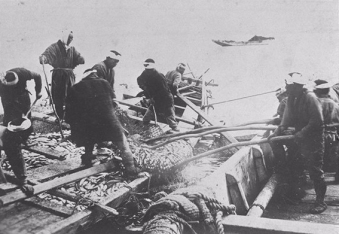 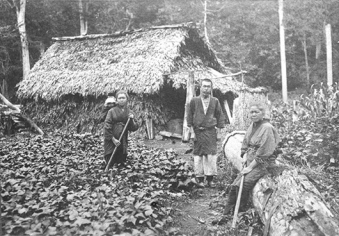 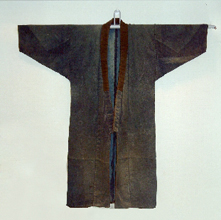 A fishermen’s long coat called donza, which was worn at herring fishing grounds from the Edo period to the early Showa era (Hokkaido Museum collection) 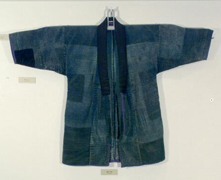 This garment is called mijika, a waist-length working jacket and was worn with long underpants, such as tatsuke, for the lower body. (Hokkaido Museum collection) 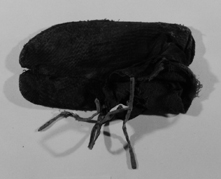 As time passed, the winter clothes in Hokkaido continued to evolve. In the early Meiji era, the government imported many red blankets for military use from the U.K. These blankets were later sold to private hands, and came to be used in various ways. They were commonly called aka-getto, after red blanket, because they mostly had a red background with several black stripes. (Red is “aka” in Japanese.) These aka-getto were sold at kimono shops in Asahikawa and Sapporo, and peddlers also sold them at farming and fishing villages.

In those days, red blankets were worn as such, or they were made into coats, leggings or gloves. The waste pieces of blanket were also used in various ways, such as wrapping them around the feet when people were wearing tsumago (long straw boots), and gradually spread to become part of peoples’ lives. In the mid-Meiji era (1890s to 1900s), many people who moved to Tokyo from Tohoku and Hokkaido wore red blankets, and the word, “aka-getto” became synonymous with bumpkin or country hick. 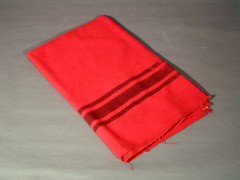 Aka-getto, a military blanket used from the Meiji to the Taisho eras (Hokkaido Museum collection) 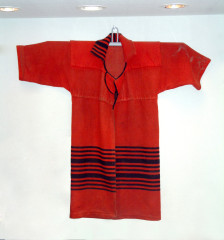 An overcoat made of aka-getto was one of the typical winter garments of snowy areas in the Meiji and Taisho eras. (Hokkaido Museum collection)）

After the mid-Meiji era (around 1900), commerce flourished in various areas, helping to improve people’s lifestyles. Kimono shops and stores started selling thick fabrics such as knits and muslin. The typical winter fashion of those days was to wear kakumaki (large square winter shawl) for women and niju-mawashi (an overcoat called inverness) for men.

Kakumaki was worn by folding a 1.5-meter-square thick woolen piece of fabric into a triangle and putting it on the head. Kakumaki is said to have originated from the above-mentioned aka-getto, though it has not been confirmed. Popular colors of kakumaki were brown, dark blue and burgundy. The winter shawl was instrumental in keeping women in snow countries warm through the Meiji and Taisho eras (1868 – 1925) until the early Showa era (1925 – 1954).

Niju-mawashi was a sleeveless knee-length winter coat with a cape attached to it. The coat, which was made of black woolen cloth (stuffed or felt), was also called inverness or tombi. It could be worn both in Japanese and western styles, and was remained popular until 1955. 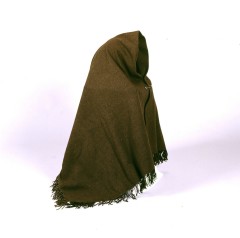 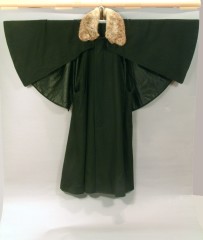 Raising sheep, shearing them and spinning thread – homespun by women – to make clothes

In the Taisho era, the Japanese government prohibited the import of wool from the U.K. and other countries due to World War I, and in return put a lot of effort into raising sheep in Japan. Hokkaido played a central role in encouraging farming households to breed sheep. Women of sheep-raising farming households sheared the sheep themselves and spun thread to knit sweaters and other clothes for their family members. They also spun thread into cloth and used the cloth to make suits for a second income. In this way, cloth woven by thread spun from sheep they had raised themselves was called “homespun.”

Homespun cloth spread throughout Hokkaido centering around Takikawa City where there was an animal research center. Its popularity lasted until the 1950s, when mass imports of cheap wool from overseas, and the general availability of chemical fibers gradually forced homespun to disappear.

These days, however, a growing number of people are enjoying homespun as a hobby or as a regional economic development project. The charm of homespun cloth created by people weaving while thinking of their dear ones will be passed on through the ages. 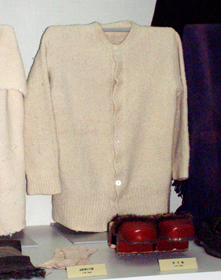 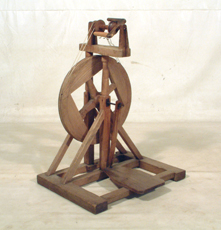 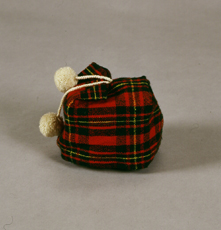 Covering the history of lifestyles in Hokkaido

In the Historical Village of Hokkaido, old winter garments and tools such as kakumaki (large square winter shawls), niju-mawashi (sleeveless winter coat with cape) and wakanjiki (ring snowshoes) can be rented from January to mid-March so that visitors can experience what winter life during the settlement era was like. Why don’t you take a stroll on the snow fields in the winter gear of days gone by?