Land Reclamation – The Dawn of Development

Development in Hokkaido continuously met with unimaginable hardship. At the start of the Meiji era, the people who built the foundation of Hokkaido conquered the harsh environment and cleared the primeval forests.

Group of pioneers during the last days of the Tokugawa Shogunate 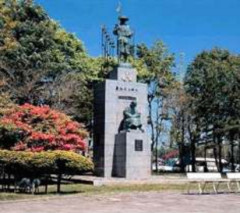 The first group of pioneers came to Hokkaido during the last days of the Tokugawa Shogunate, before the Hokkaido Development Commission was launched. In 1800, Hachioji Sennin Doshin (1,000 junior officials from Hachioji) migrated from Bushu Hachioji to Hokkaido, which was called Ezochi (Ezo region) at that time.

The Tokugawa Shogunate reinforced defensive preparations against Russia through direct rule of Ezochi. Hanzaemon Hara, the head of Hachioji Sennin Doshin, heard about it and moved to Ezochi, accompanied by his younger brother, Shinsuke, and about 100 young men of the Doshin. Hanzaemon settled at Shiranuka (current Shiranuka Town) and Shinsuke at Yufutsu (current Tomakomai City). Based on this connection, Tomakomai and Hachioji cities have now established a sister city relationship.

As seen above, although there were some initiatives of small-scale migration and reclamation during the direct-ruling period by the Shogunate, they did not achieve sufficient results. Still, some development policies by the Shogunate including opening of Nanae Herb Farm, mine surveys and surveys aimed to introduce western-style technologies became pathfinders for full-fledged Hokkaido development in the Meiji era. 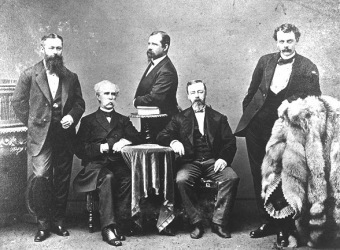 Horace Capron, advisor to the Hokkaido Development Commission, and other employed Americans
Capron is second from the left in this photo (Hokkaido in the Meiji and Taisho eras).

When the Meiji government was formed, Ezochi was renamed Hokkaido and the Development Commission, the central government agency for development of Hokkaido, was established.

Kiyotaka Kuroda, vice chief of the Development Commission, prepared large-scale development plans for Hokkaido and Sakhalin, because he thought that the development of Hokkaido would be a pressing need to protect Japan from Russia. He was a powerful figure in the Satsuma clan, and he later became the second prime minister. His proposals were accepted and the Ten-Year Project of the Development Commission started in 1872 for the ten-year term with the total budget of one thousand ryo (unit of money).

Learning from the experience during the Edo period of failing to overcome the harsh environment in Hokkaido, Kuroda focused on the United States, which had a similar natural environment and rich experience in development. He asked Horace Capron, the U.S. Secretary of Agriculture, to assume the position of advisor for the Development Commission. Kuroda also invited William S. Clark, president of the Massachusetts Agricultural College, to be the Vice-Principal of Sapporo Agricultural College, which Kuroda established in 1875, aiming to nurture human resources who can engage in development. Shosuke Sato, Inazo Nitobe, Kanzo Uchimura and other personnel, who took leadership in Japan during the Meiji and Taisho eras , were among the first and second generation graduates. 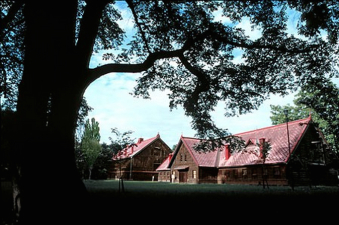 Sapporo Agricultural College Farm No.2, designated an important cultural asset by the national government
Based on the idea of Dr. Clark, this farm was constructed in 1876 to provide a model of western-style dairy farming. This architectural style was introduced to and accepted on farms throughout Hokkaido, and created the particular rural landscape of Hokkaido. (Photo courtesy of the Hokkaido University Museum) 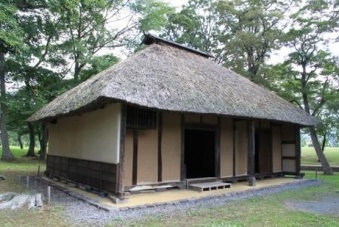 Samurai warriors, who lost their Roku (stipend) due to the Meiji Restoration, took a central role in Hokkaido development in the early stage.

In addition to them, feudal retainers from the former Aizu clan immigrated to Hokkaido, because the Aizu clan had been abolished as a result of the Boshin War (a civil war between Imperial and Shogunate forces). Some retainers confronted the head family by siding with the Imperial army. For instance, Kunitane Inada, a keeper of Sumoto-jo Castle in Awaji Province, confronted his head family and settled in Shizunai (current Shinhidaka Town).

The Tondenhei system was founded in 1873. Only samurai families were initially able to become Tondenhei (soldiers who developed and guarded Hokkaido). They engaged in land reclamation by obtaining farmland, houses and farm tools from the national government, while performing military exercises under strict rules as members of the armed forces. Tondenhei from Kotoni and the Tonden areas actually made an expedition to the Seinan War (the last civil war against the Meiji government) to the Kyushu region in 1877. Samurai-centered Tondenhei continued until 1890, when Tondenhei were recruited for Ota Tonden (current Akkeshi Town).

Those samurai immigrants endured the harsh environment in Hokkaido with their strong desire to contribute to the nation through development and to revive their family names. The foundations of many towns in Hokkaido were built on the labor of Tondenhei. 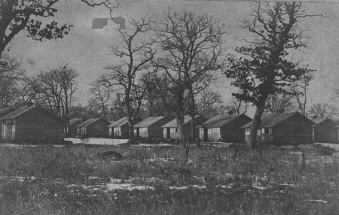 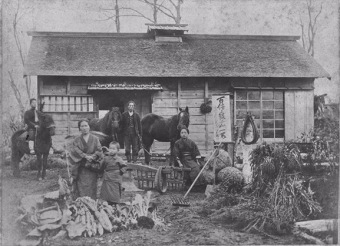 The Historical Museum of Date

The museum has a permanent exhibition of approximately 2,000 items including armor, swords, paintings and calligraphic works connected to the Date family. The memorial hall is built in the large garden, where approximately 70 kinds of trees delight the visitor’s eyes.

Entering and viewing the inside of the house at the time

The buildings were repaired and reconstructed at the site where soldiers’ houses had originally been located in 1874. They have earthen floors, a hearth, borderless tatami mats, and sliding shutters; styles that are not usually found in houses in Hokkaido.