Jomon Culture and the Archaeological Sites in Hokkaido and Northern Tohoku

The Jomon culture developed approximately 15,000 years ago characterized by the use of pottery across the Japanese Archipelago, including Hokkaido. A lot of Jomon archaeological sites have been found in Hokkaido, and we can learn about the life and society of the Jomon people through these sites. Hokkaido and the northern Tohoku region have been seeking to obtain world heritage listing for the Jomon archaeological sites in Hokkaido and northern Tohoku. What is the Jomon culture?

Jomon culture coexisting with the nature 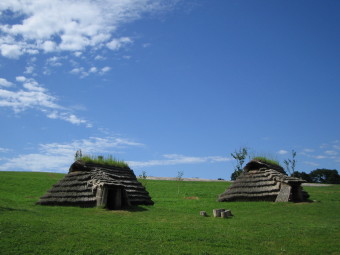 What is the Jomon culture?
The Jomon people used various kinds of tools besides pottery. Many tools, such as chipped stone axes, bows and arrows, fish hooks and harpoons, were developed, and hunting and fishing techniques improved. The Jomon people built pit dwellings by digging holes in the ground and settles down instead of the nomadic lifestyle they used to follow before the Paleolithic culture. Villages were formed where residents lived in communities, and people also started to keep dogs.

The Japanese Archipelago’s warm and rainy climate is suited to the growth of woods, and the woods supply people with many blessings, such as animals and nuts. Water running through the woods formed rivers that were frequented by fish, such as salmon and trout, and where shells washed up from the sea. Forests and grasslands also developed around the villages, and deer and small animals living there became food for people. The lives of residents were close to nature around the villages.

The Jomon culture has been highly evaluated in the world as a peculiar culture involving mainly hunting, fishing and gathering that continued for over 15,000 years.

After the Ice Age, the Neolithic era featuring agriculture and settlements started around the world, and “civilization” developed. Civilization brought improved productivity through agriculture, and led to the formation of social positions, such as kings, social stratums, and the birth of nations and wars.

As for the Jomon culture, authentic agriculture was not conducted and the people settled down in one place while hunting, fishing and gathering as well as conserving the nature. There are no traces of battles, such as moats and shields surrounding the communities of the villages, and it was known that the people took care of elderly people and children, creating a stable society. The Jomon culture had continued approximately 10,000 years, the only culture to have continued as long in the world.

The Jomon culture that spread across the Japanese Archipelago was not a “delayed” culture with no agriculture, but a “mature” culture including the development of hunting, fishing and gathering habits in coexistence with nature.

Related link
Passing on salmon fishing during the Jomon period 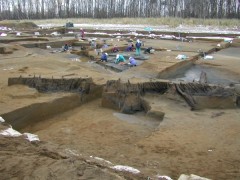 A large number of secant piles were unearthed from the bottom of the river where salmon fishing was conducted during the Jomon culture .

Many large-scale “eri,” which had been used to catch salmon, trout and dace during the Jomon period, as well as wooden landing nets and parts of dugout canoes were unearthed from the Momijiyama Dune located on the boundary of Sapporo and Ishikari cities. “Eri” is a device that was used to catch fish by planting secant piles in rivers and lakes to lure fish and then catch the fish. The unearthed artifacts are exhibited at the Ishikari Sakyu-no-kaze Museum.

Learn the life of the Jomon people 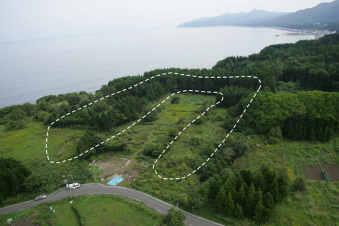 Full view of an earthwork mound at the Kakinoshima Site: The earthwork mound built approximately 4,000 to 4,200 years ago has existed almost without breaking. (Photo courtesy of Hakodate City)

The life of the Jomon people can be learned from the remains located in many places around the nation.

In Hokkaido, approximately 12,000 remains from the Paleolithic culture and the Ainu culture have been found, and roughly 7,000 of them are remains from the Jomon period. A large number of remains of dwellings and villages as well as tools, such as pottery and stone tools, were discovered at Jomon culture sites. Graves, watering places and vestiges of hunting have also been found.

Many shell middens have also been unearthed in Hokkaido. From Kitakogane Shell Midden in Date City, not only shells like clams, oysters and scallops, bones of tuna, flatfish and sea animals, such as fur seals and whales, and graves of the Jomon people and the traces of ceremonies conducted by lining up the skulls of deer, were discovered. At the Higashikushiro Shell Midden in Kushiro City, shells, fish bones and skulls of dolphins that had been lined up radially were also excavated.

The Jomon people believed that the spirits dwell within every single being and phenomenon, and shell middens were considered to be the places where offerings were made to the world from where people were brought blessings.

Earthwork mounds discovered in Ofune and Kakinoshima sites in Hakodate were also considered to be places for rites and ceremonies. The places where offerings were made to gods were believed to be precious spaces to pass on the religious beliefs of the Jomon people, and some of their ideas about offerings were the same as those of the Ainu culture.

It is said that all remains of the Jomon culture in Hokkaido have their own distinctive regional features.

Unique arrowheads known as blade arrowheads were introduced in northeastern Hokkaido around 7,000 years ago under influences of Siberia and other Asian continental areas.

Southwest Hokkaido and the northern Tohoku region on both sides of the Tsugaru Strait also had a relationship through common cultural areas. The fact was proved by the use of similar cylindrical pottery in the early and middle Jomon periods. A total of 18 Jomon archaeological sites around the Tsugaru Strait are now seeking to obtain world heritage listing. In Hokkaido, a total of six sites, including Kitakogane Shell Midden, Irie-Takasago Shell Midden, Washinoki Site, Ofune Site, Kiusu Earthwork Burial Circles and Kakinoshima Site are included in these 18 Jomon archaeological sites. 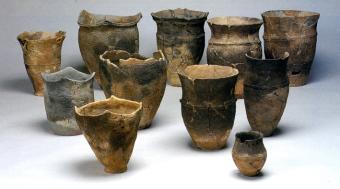 Pottery unearthed at the Ofune Site, etc.: Pot-like cylindrical pottery, shaped like those unearthed in the northern Tohoku region, and other types of pottery made in later periods are included. (Photo courtesy of Hakodate City) 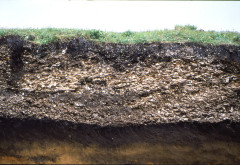 The shell midden from the early Jomon period is located on a plateau facing the Kushiro Marsh. In 1970, it was designated a national historic site – the first such designation in Hokkaido. Radially-lined buried skulls of dolphins as well as Steller’s sea lions and dogs were unearthed. It is now open to the public as Kushiro City’s shell mound historic park.
Related links

Huge pit dwellings that had been more than 2 meters deep were unearthed. 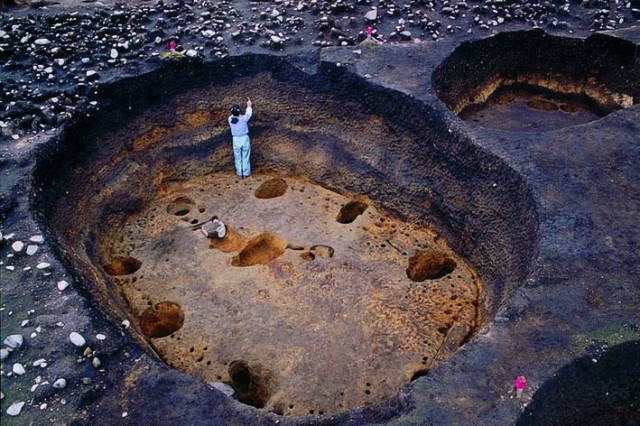 This large-scale settlement site located on a coastal terrace facing the Pacific Ocean has over 100 remains of pit dwellings and earthwork mounds. It is known that the community remained here for over 1,000 years. It now serves as Jomon Park and Jomon Woods and the dwellings, etc. have been restored.
U-shaped earthwork mounds of over 160 meters long 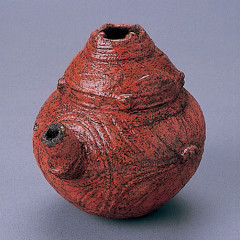 This settlement where the people lived for approximately 6,000 years from the early to the late periods of the Jomon culture has the nation’s largest earthwork mound, suggesting the possibility that rites and ceremonies had been performed here. The site can be observed from the neighboring Hakodate Jomon Culture Center.
Jomon culture’s largest-scale engineering works 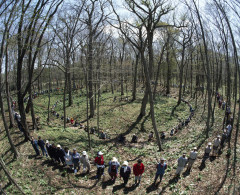 Earthwork Burial Circle No. 1 has a diameter of 75 m – the largest among the earthwork burial circles at the site. (Photo courtesy of Hokkaido Archaeological Operations Center)

A public cemetery during the Jomon culture built by piling soil around dug holes to create donut shapes. A total of eight earthwork burial circles were found. The largest one measures over 75 m in external diameter and 5 m in depth. The circles are located in a natural forest, thus providing visitors with the opportunity to actually experience the atmosphere of the Jomon period.
Hill where visitors feel in touch with the Jomon period 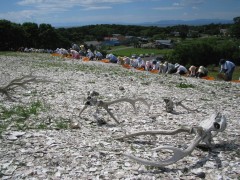 Restored shell midden. Deer skulls are also placed inside it.

The Kitakogane Shell Midden comprises the ruins of a settlement of five shell middens located on a plateau facing Funka Bay. There are shell mounds as well as dwellings, graves and a ritual ground at watering places, and the remains of a great amount of accumulated grinding stones and milling basins were discovered near the spring at the center of the site. It now serves as a historical park for visitors to experience the Jomon culture.
Largest stone circle in Hokkaido 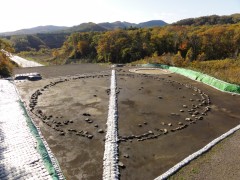 Full view of the stone circle in 2011, before the opening of the expressway (Photo courtesy of Mori Town)

This site is composed of a stone circle with a diameter of 37 m and a circular pit cemetery (mass grave). It has been preserved very well, because it had been thickly covered in volcanic ash from Mt. Komagatake. The site was discovered during expressway construction, and to preserve the site, a tunnel was built below it.
Over-3-m-thick black shell midden 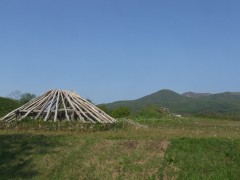 Two shell mounds located on a hill overlooking Mt. Usu and Funka Bay. The shell layers are as thick as 3 m, and contain many fish bones and parts of pottery; therefore, the shell mound is called the Black Shell Mound. The site now serves as a park with restored pit dwellings, and where the inside of the shell mound can be viewed from a tunnel.
Paleolithic Culture and Jomon Culture
The Prayers and Hearts of the Jomon People
Jomon Culture