The Birth of Hokkaido

During the 4.6 billion-year history of the earth, Hokkaido has been transformed dramatically. The mountains, seas, rivers, lakes, plains and forests we see and the animals and plants that live there have come into being through along succession of historical events. Numerous fossils of prehistoric life have been found on the land. Let’s look at Hokkaido from the viewpoint of the eternal history of the earth.

Background behind the birth of Hokkaido

The earth is covered by many thick plates that constantly collide with each other. It is well known that the Great East Japan Earthquake was caused by a strain that occurred when the Pacific plate sank under the Eurasian plate.

There are various theories regarding the birth of Hokkaido, but there is no doubt that the movement of these plates created Hokkaido. The place where Hokkaido lies now used to be a boundless expanse of sea 200 million years ago.

Approximately 140 million years ago, the North American plate in the east and the Eurasian plate in the west started moving towards each other, and an island was created on each plate. These islands are called Old Okhotsk Land and Old West Land. These two islands moved even closer towards each other until they collided to form a single island approximately 40 million years ago.

The collision of these two continental plates causes volcanic activity, which in turn led to collision of the Kurile arc from the east. The Kurile arc was formed at the boundary between the Pacific plate from the south and the North American plate. These crustal activities caused the center of the island to rise and the plates to curl up, forming the Hidaka Mountains, the backbone of Hokkaido. In reaction, the earth’s crust on the west was lifted up, causing the formation of the Ishikari Plain. In this way, the original form of Hokkaido was born approximately 10 million years ago. This is one of the theories regarding the birth of Hokkaido.

Approximately 2.5 million years ago, when the Pleistocene of the Quaternary period, which is called the ice age, began, the coastlines changed significantly with climate changes. The violent crustal movement gradually came to a standstill, and Hokkaido has maintained its current shape since at least 210 thousand years ago. 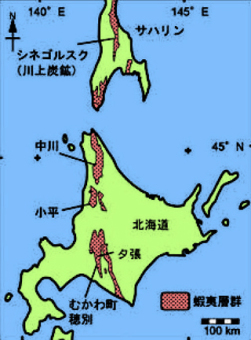 Distribution of the Ezo stratum group

The Ezo group stratum stretches from Cape Soya in the north of Hokkaido to Urakawa in the south. This stratum accumulated in the sea during the Cretaceous, and municipalities in this area, including Nakagawa Town, Obira Town, Mikasa City, Yubari City and Mukawa Town’s Hobetsu area, abound in fossils like ammonite, plesiosaur and various others. This region has Japan’s largest ammonite output, and is famous for numerous large ammonite fossils.

The Cretaceous is famous as the age when dinosaurs lived. A nearly complete skeleton of hadrosaurids (estimated length: 8 m) dating 72 million years back has been found in the Hobetsu area of Mukawa Town. It was a world-class discovery. Hadrosaurids ate plants, lived in groups and prospered worldwide. It is thought that they had a striped body and that they could run fast to flee from carnivorous dinosaurs. The impact of a giant meteorite on the Yucatan Peninsula in the latest Cretaceous is believed to have caused the extinction of dinosaurs. A substance called iridium, evidence of the impact, has also been found in Hokkaido. 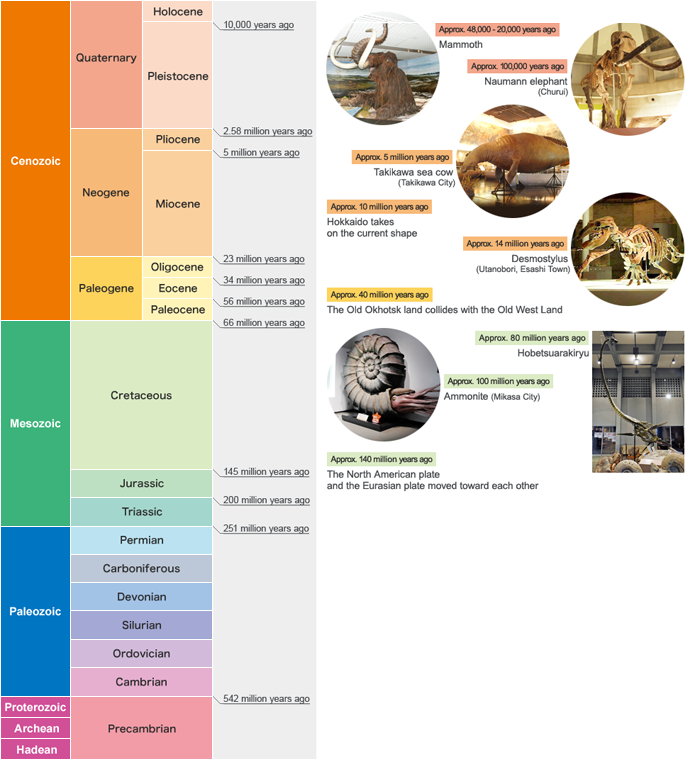 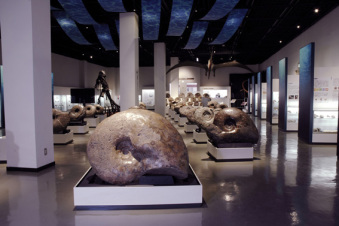 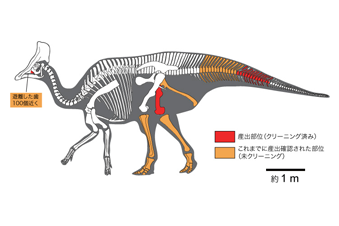 Figure of Olorotitan, a relative of the Hobetsu dinosaur (Photo courtesy of Hobetsu Museum) 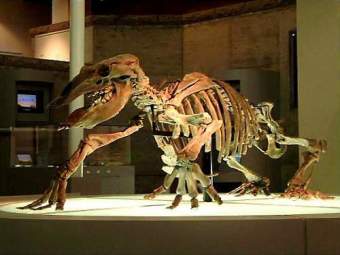 Restored skeleton model of Desmostylus
The name “Desmostylus” is a combined term of “desmos” (= bundle) and “stylus” (= column), and the mammal is characterized by molars looking like a bundle of columns. (Utanobori Health Restoration Village Furusatokan Museum collection)

After dinosaurs became extinct, mammals prospered. Fossils of a complete child Desmostylus skeleton of approximately 14 million years ago was found in the Utanobori area of Esashi Town. Desmostylus was a large mammal measuring 2 to 3m in length that weighed over 1t, and is believed to have been a semi-aquatic animal that lived both in the sea and on land.

Hokkaido is also known as the place where more sea cow fossils have been found than in any other part of Japan. Sea cows, family of dugongs, were large mammals living in the sea. The Shosanbetsu sea cow from approximately 12 million years ago is Japan’s oldest sea cow fossil that had lived in a warm sea. After the sea later cooled, fossils of the Sapporo, Takikawa and Kitahiroshima sea cows, representing long periods of time, were found. These fossils are highly valued because they demonstrate the path of evolution.

Mammoths from the north and Naumann elephants from the south

Hokkaido is the only place in Japan where both mammoths from the north and Naumann elephants from the south lived in.

When the Quaternary began approximately 2.5 million years ago, the earth cooled, and the period was called the ice age. During this period, the earth repeatedly cooled down and warmed. In the cold glacial stage, moisture remained on land and the sea level dropped. On the other hand, during the warmer interglacial stage, the sea expanded and advanced on to the inland. As a result, the coastlines of Hokkaido continually changed. In the glacial stage, the sea level once dropped by 80 to 140 m. This caused the disappearance of the Tsugaru Strait and the Soya Strait, and Hokkaido was connected to the continent by land. A whole Naumann elephant skeleton fossil found in the Churui area of Makubetsu Town dates back 120 thousand years. The Naumann elephants must have moved across the Tsugaru Strait from Honshu.

Mammoths entered Hokkaido by way of Sakhalin 45 thousand to 20 thousand years ago. Following the mammoths, people from the north arrived in Hokkaido during the same period. 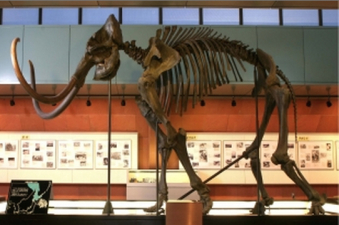 Restored mammoth skeleton
A replica made based on fossils found in Russia. It measures 3.5 m in length and 2.9 m in height, and has 2.5-meter long tasks (Kushiro City Museum collection) 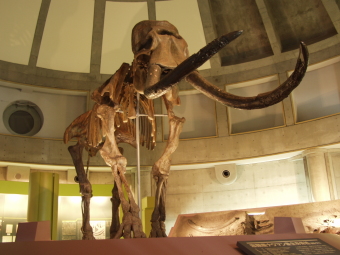 Read the history of the mountains from the rocks

Visitors can learn how the Hidaka Mountains were formed while touching rocks and fossils from around the mountains. Materials on mountaineering and nature are also on display. The observatory on the fourth floor commands panoramic views of the mountains.

Hometown of the 8-meter long Hoppy

This museum was established to exhibit Hobetsuarakiryu (a.k.a. Hoppy), which had been unearthed in the area. Plesiosaurs, mosasaurs, ammonites and inoceramus that lived in the Mesozoic Cretaceous period are also on display.

This museum exhibits approximately 1,000 fossils including 600 ammonites of roughly 80 kinds found in Hokkaido. Visitors can touch the exhibits outside cases excluding some.

As many as 11 Desmostylus fossils have been unearthed in Utanobori since 1977. The facility exhibits Desmostylus skeletal specimens, stoneware and gold dust collected in the Pankenai River and Japanese huchen, a rare fish.

This is a rare museum in the world with its large number of Desmostylus specimens on display. Visitors can also learn about Paleoparadoxia, Behemotops and Ashoroa, all family members of Desmostylus. Numerous fossils unearthed near Ashoro are also on display.

This is a facility for meetings, training, learning and exchanges by local people. A restored Shosanbetsu sea cow skeleton found in the village is on display here. The fossil of an unborn child has also been found, and is displayed with the parent.

Nakagawa Ecomuseum exhibits numerous fossils including those of the 11-meter long Nakagawa plesiosaur unearthed in Nakagawa Town, nails of Therizinosaurus, ammonites and sharks. It also has training and accommodation facilities for school and other groups.

Experience the age of dinosaurs and the ice age

This hands-on museum allows visitors to see, touch and learn all about coal and coal mining. Ammonite, plesiosaur and other fossils are on display at the Yubari Fossil Pavilion on the premises.

At the Fossil Hands-on House, restored skeletons of the Numata sea cow, Protominke whale, Desmostylus, a 12-meter long plesiosaur (Thalassomedon) and a mosasaurus are on display. Visitors can also simulate fossil excavations, make a plaster replica and participate in mini-excavation.

Excitement at the discovery of Naumann elephant

This museum conveys the excitement that resulted at the discovery of the Neumann elephant fossil following the course through its excavation using panels, footage, a 4.3-meter long restored model and other materials. Michinoeki (roadside station) Churui is next to the museum.

Complete skeleton of a mammoth

This museum exhibits the complete skeleton of a mammoth in the Mammoth Hall, and fossils of Kushiro Tapir, a mammal from approximately 38 million years ago, as well as the history of the Kushiro Wetland, the nature and history of Kushiro, and the Ainu culture.

A mammoth and an Irish elk welcome visitors

Mammoth molar and Irish elk horn fossils were found in Yuni Town in 1990. Full-size models of a mammoth and an Irish elk are on display at the main hall of the library and museum complex.

Meet a mammoth at the windy town

This facility exhibits materials on kelp fishing, the town’s main industry and the ecology of kelp, as well as the nature, history, culture and fishery industries of the town. Materials on the formation of the Hidaka Mountains and mammoth molar fossils are also on display.

Museum in the Yufutsu Plain

This museum complex, which also houses artworks, was refurbished in 2013, and exhibits full-size family mammoth models at the entrance hall. Various materials, including those on the geology and nature of Yufutsu and Mt. Tarumae, ammonites from Hidaka, creatures from the Yufutsu Plain, are on display.

Natural history of the entire Hokkaido