Surrounded by the ocean, and encompassing vast areas of land, Hokkaido boasts thriving fishery and agricultural activities leveraging these natural resources. Through wisdom to enjoy the taste of local products and willingness to spend long and severe winter, Hokkaido’s unique food culture has been created. After the Meiji era, people who migrated from various parts of Japan to Hokkaido brought along the specific tastes of their hometowns, and some of these have taken root in Hokkaido while gradually changing their forms.

※With regard to the traditional food of the Ainu culture, please refer to Ainu culture: Traditional livelihood ― Food / Clothing / Housing.

In the Edo period, rice could not be produced at Matsumae, a castle town of the Matsumae clan, and people’s dietary habits mostly depended on foodstuffs obtained through trade with the main island of Japan.
Nenju Gyoji-cho (annual event book) written in the early Meiji era by the Kondo family, chief retainers of the Matsumae clan, describes how rice, soup, cooked food served in a pot, cooked food served in a bowl with a lid, food served on a plate, salted salmon, other salted fish, namasu (a dish of raw fish and vegetables seasoned with vinegar), nishin-zuke (pickled herring and vegetables) and fish sushi were served on New Year’s Eve, and salted salmon, nishin-zuke and izushi (fermented pressed sushi) were typically served as plate dishes.

The typical dishes relished on New Year’s Eve and the New Year’s Holidays in the southern parts of Hokkaido and the areas along the Sea of Japan coast include nishime (food simmered in soy broth), kujira-jiru (whale blubber soup), salted salmon, namasu (dish of raw fish and vegetables seasoned in vinegar), chawanmushi (steamed egg hotchpotch), seasoned herring roe and slices of raw fish. 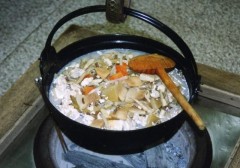 Kujira-jiru, a dish of simmered salted whale fat, tofu (soybean curd), konnyaku (gelatin-like food made from konjac root), niyo (a kind of Japanese parsley, also called ezo-nyu), radish, shiitake mushrooms, warabi (bracken) and potatoes in soy soup, is said to have been made in a big pot and served for the first three days of the new year.

The whale blubber soup, which has been passed down to fishing villages in Japan, is consumed in the southern and northern parts of Hokkaido along the Sea of Japan coast. Whales are also called “Ebisu,” a symbol of a good catch, in fishing villages where it is believed that they drive shoals of herring to the shore. That is why people have developed a habit of eating whale soup during New Year’s Holidays, hoping for a bountiful catch.

Residences of the Matsumae clan 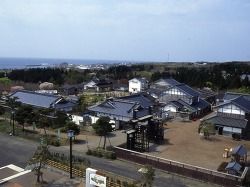 Re-created residences of the flourishing days of the Matsumae clan consist of 14 buildings including samurai residences, lodging houses for herring fishermen and kaisen donya (wholesaler in port), as well as a dining hall that offers herring soba (buckwheat noodles) and sampei-jiru set meals. 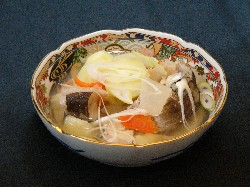 Sampei-jiru (a salty soup dish created by boiling vegetables and fish) made of herring, salmon or Atka mackerel is also popular as one of the local tastes of Hokkaido. The home-made soup involving such vegetables as radish, carrots and butterburs as well as seasonal wild plants, was an appropriate dish for workers at the herring fishing grounds who were not likely to eat enough vegetables. Currently, the name of this dish is used to refer to a boiled soup with salted fish and vegetables, but it used to refer to a dish of cooked vegetables flavored with fish sauce from salted fish. The soup, which is similar in taste to shottsuru of Akita prefecture, is believed to have been introduced by migrant workers and immigrants from the Tohoku district.
After the Meiji era, people at fishing grounds also originally made sampei-jiru using fish sauce from salted herring, Atka mackerel and cod with the insides intact. However, since the soup had a very strong smell, they gradually changed the recipe, using salted fish without insides instead of fish sauce. As a result, the dish also gained popularity in urban areas, becoming one of the typical local tastes of Hokkaido. 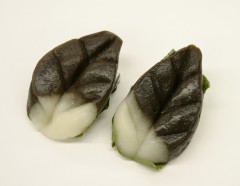 In Hokkaido and the Tohoku district, bekomochi, a sweet made of rice flour, is popular. This sweet is also eaten on Children’s Day (May 5th) in areas stretching from the southern parts of Hokkaido to the areas along the Sea of Japan.
Bekomochi come in various shapes, colors and patterns: Leaves and round shapes are popular in various parts of Hokkaido, and some are in the shape of sea cucumbers, as seen in the Shimokita district, Aomori prefecture. In some areas, it is also called kujira-mochi.
There is no doubt that the sweet taste of bekomochi, which is slowly digested although it is small, has continuously been loved by people as a source of energy when they are tired.

After the Meiji era, full-scale farm land reclamation was launched in various parts of Hokkaido, where it was started to cultivate many different kinds of crops such as oats, barley, wheat, hull-less barley, buckwheat, soybeans, millet, corn, gosho-imo (potatoes) and pumpkins. Among these crops, potatoes have become widely diffused as the best crop of Hokkaido because they are resistant to frost damage and are relatively easy to cultivate.
In addition, since gosho-imo have a good keeping quality, they have often been consumed throughout the year as a substitute for rice, side dishes and snacks. They are consumed in creative ways: besides being boiled, they are grated into dumplings and baked or mashed into imo-mochi (potato cakes), etc.
The name, gosho-imo is derived from the popular belief that five sho (a unit of volume) of potatoes can be harvested from a single seed potato. Potatoes were really reliable enough to support peoples’ lives even when other crops produced a poor or bad harvest. 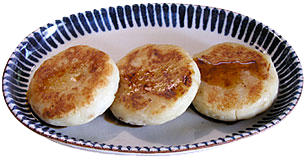 Imo-mochi, which are still made at home, can be prepared as follows: Mash boiled potatoes, add some starch to the mashed potatoes, knead them into sticks and slice into rounds. Boil them in hot water or grill on a net or in a frying pan, and eat with soy sauce while still hot. It is also recommended to eat imo-mochi with sugar and soy sauce, or soybean flour. (Photo courtesy of Intelligent Link Inc.) 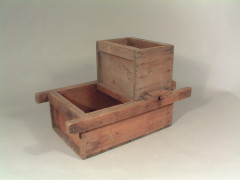 This museum collects and exhibits a variety of tools that have supported the dietary habits of people in various parts of Hokkaido.

The highlight of this museum is an exhibition called “Establishment of Tokachi Agricultural Kingdom” and an explanation of the major farming crops. Various farming tools that were once used are displayed and the explanations on the varieties of potatoes and legumes are extensive and instructive.