The sense of season in Hokkaido, where various flowers burst into bloom with the coming of spring after a long winter, is totally different from that in other parts of Japan. Distant mountains and extended vast plains provide panoramic views unique to Hokkaido. Colorful expressions have been molded by the sense of the people who live here.

This section highlights modern and contemporary paintings and sculptures. Around 1900, Suishu Sugawara arrived in Hokkaido as an art teacher to pass on the Japanese-style painting skills of the Kano school. After that, Hoshun Yamaguchi attracted attention at the Imperial Exhibition for his noble style of paining.

During the Showa era, Eien Iwahashi and Tamako Kataoka, renowned Japanese-style painters, were active. Eien Iwahashi depicted the harsh nature of Hokkaido with a melancholy touch, while Tamako Kataoka broke from tradition, using dramatic structures and primary colors to express a gorgeous world. Although their painting styles are in sharp contrast to each other, both were Japanese-style painters rooted in Hokkaido’s climate.

Concerning Western-style paining, Sapporo Agriculture College’s Kuroyuri Association, established by Takeo Arishima, played a leading role. Kinjiro Kida entered the world of painting through an encounter with Arishima. Kinjiro Kita was born in Iwanai, and used to paint dynamic landscapes of the sea while working as a fisherman. He is featured in Umareizuru Nayami, a novel by Arishima. Kotaro Migishi was a painter who was active as a modernist in the adolescent days of modern Japanese-style painting from the Taisho era to the early Showa era. Zensaku Nakamura is known for bright landscape paintings with a sense of space. 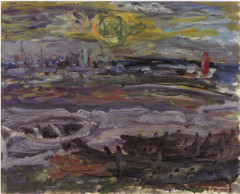 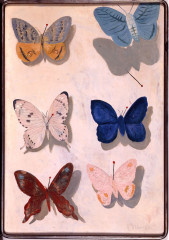 After the Second World War, Nissho Kanda attracted attention as a unique Hokkaido-influenced painter. Nissho painted oil paintings through which he taught himself while engaged in agriculture in Shikaoi Town. He is famous for representational paintings with a strong touch; he portrayed workhorses and cows on plywood with a painting knife or spatula.

Miematsu Tanabe drew magnificent landscapes of Hokkaido using a technique of applying paint thickly to a solid framework. Keiyu Nishimura built a unique world with innovative compositions and colors. He moved to France at the age of 40, and was highly evaluated in Europe. Tatsuoki Nambata began painting after he met Kotaro Takamura, and played a key role as an abstract painter after the Second World War. His works were totally abstract yet expressed Japanese poetic sentiment. 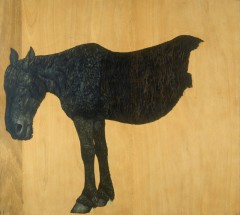 Concerning sculptures, Teijiro Nakahara is known for statues that are realistic, but express the deep inside. Churyo Sato expressed vivid images of women using bronze and wood. Shin Hongo placed importance on the social nature and public nature of sculptures and focused on monumental field sculptures.

Kan Yasuda is a sculptor based in Italy, and his massive field sculptures of marble and bronze are highly valued worldwide. Arte Piazza Bibai is a park created to exhibit his works. Bikky Sunazawa was a unique sculptor who inherited Ainu traditions and expressed an animistic world view through wooden sculptures. 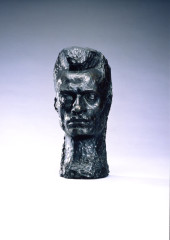 This museum systematically collects and preserves outstanding Hokkaido art works from various fields during and after the Meiji era. It also actively collects domestic and international works of the modern and post-modern period, especially glass craft as well as works by Jules Pascin and other Ecole de Paris artists.

This museum mainly collects and exhibits works by Tatsuoki Nambata, a Western-style painter from Asahikawa, other artists associated with northern Hokkaido, and wood-based formative artists.

This museum houses a collection of excellent works featuring art of southern Hokkaido, oriental arts and calligraphy, as well as modern art involving letter symbols of the modern and post-modern eras.

This museum is located in a cultural zone with the Obihiro Centennial City Museum and a zoo situated adjacently, and has an extensive exhibition of outstanding domestic and international art works. It has a substantial collection of works by major artists from eastern Hokkaido, domestic and international posters, and block prints and other modern and contemporary print art works.

This museum systematically collects visual works including photos, nature-themed pictures, and other pieces related to the Kushiro and Nemuro areas, with a unique resulting collection.

This museum permanently exhibits a collection of works by Kaichi Igushi, a Western-style painter from Abashiri, and other local artists.

This museum consists of an art section and a natural history section. In the art section, works by Eien Iwahashi, a Japanese-style painter associated with Takikawa, Masumi Ichiki, a Western-style painter, and Sokyu Ueda, a calligrapher, are on permanent display.

This museum is comprised of an art section and a natural history section. The art section houses and exhibits works by Miman Endo, a Western-style painter who led the art world of Tomakomai, and other local artists.

This museum mainly houses and exhibits works by artists associated with Otaru, and holds special exhibitions based on specific themes. It also conducts art seminars and art walking events. Works by Zensaku Nakamura, a landscape painter from Otaru, and Arinori Ichihara, a printmaker who worked in Otaru, are on permanent display.

This museum houses and exhibits works by Kinjiro Kida, a painter who was born and spent his whole life in Iwanai. It also holds various events involving local residents.

This museum houses and exhibits a collection of works by Keiyu Nishimura, a Western-style painter who was originally from Kyowa Town and used to be active in Paris. There are two exhibition rooms where various works are introduced from different angles and the reconstructed atelier where Keiyu Nishimura spent his final years.

This museum permanently exhibits almost half of the masterpieces by Nissho Kanda, a well-known Hokkaido artist and master of Western-style representational painting. These include oil paintings from his early days to Horse, his last (unfinished) work.

Asahikawa Museum of Sculpture in Honor of Teijiro Nakahara

This museum featuring sculptures was built in honor of Teijiro Nakahara, a sculptor who was associated with Asahikawa and left a significant mark on the history of sculpture in Japan. It exhibits 12 existing works of Teijiro Nakahara as well as works by Rodin, who had a considerable influence on him, Morie Ogiwara and other artists.

This museum houses and exhibits more than 1,800 works (including sculptures and paintings) by Shin Hongo, a sculptor from Sapporo who led the representational sculpture movement in Japan after the Second World War and focused on the production of monumental field sculptures. It also holds special exhibitions to introduce contemporary sculptors.

This outdoor sculpture park took shape on the site of a closed elementary school. Kan Yasuda, a sculptor from Bibai, participated in the construction of the park, where more than 40 of his works are placed among trees. Sculpture workshops in a hands-on studio and various exhibitions and concerts are held here.

Imagination Inspired by the Land – Literature
Northern Art and Culture