Ezochi from the Medieval Period through the Modern Times

Hokkaido was called Ezogashima (Ezo Island) or Ezochi (Ezo region) from the medieval period to the modern times. Ezo refers to people of the Satsumon culture, which was subsequently replaced by the Ainu culture. At that time, the Wajin (Japanese from Honshu) lived in the southern part of Hokkaido, where the Matsumae clan was established as the northernmost clan of Japan. Another Japanese history developed in the northern land.

Ezochi from the medieval period to the modern times 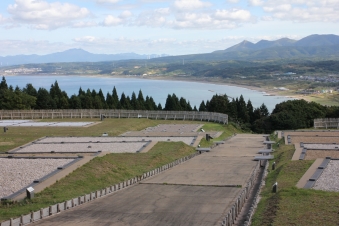 Kaminokuni Katsuyamadate Castle Ruins designated a historic site by the national government
A castle was built on a mountain by Nobuhiro Takeda in the late 15th century. Excavation research has indicated that the area used to be a large-scale fortified town where the Wajin and Ainu lived together. (Photo courtesy of Kaminokuni Town)

“Suwa Daimyojin Ekotoba” written in the 14th century documented Hokkaido during the medieval period. According to this document, groups of people called Hinomoto, Karako and Watarito lived in Ezo-ga-chishima. It is believed that Hinomoto and Karako refer to the Ainu people, and Watarito refers to the Wajin people.

Based on thriving trade between Ainu and Wajin people, Chinese pottery and bronze coins were imported into Hokkaido, while Hokkaido’s kelp and salmon were exported to Honshu. Tosaminato Port on the Tsugaru Peninsula, the center of this trade, was controlled by the Ando clan, which ruled the region as the local Ezo government.

It is known that more than ten castles were built by Wajin lords in southern Hokkaido at that time. After a series of conflicts between these lords and the battle of Koshamain, the Kakizaki clan (their family name was later changed to Matsumae) gained power over the region. In the 16th century, the center of trade between Ainu and Wajin people shifted to Matsumae; however, the Ainu actually traveled to Honshu to trade freely with the Wajin on equal terms. 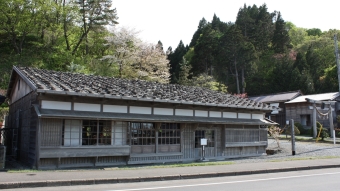 Former Sasanami Residence designated an important cultural property by the national government
This is the oldest private house still standing in Hokkaido. The first generation of the Sasanami family is considered to have migrated from Noto during the Kyoho era (1716 – 1735). The house in the photo is said to have been built by the fifth head of the family in 1838 (the 9th year of the Tenpo era).
(Photo courtesy of Kaminokuni Town)

After the Matsumae clan was granted certification (kokuin-jo) for exclusive rights to trading with the Ainu people in 1604, the clan strengthened its control of the Ainu and Ezochi. In the 1630s, a system called “akinaiba chigyo” was introduced, and the trade rights were given to vassals, facilitating Wajin people to settle in Ezochi and perform gold mining.

This system created unfavorable trading conditions for Ainu people, and their dissatisfaction led to the War of Shakushain in 1669. Defeated in the war, the Ainu people were placed under the strict control of the Matsumae clan.

Meanwhile, the owners of the trading posts allowed Wajin merchants to manage the trading posts, thus merchants started gaining power in the Wajin society, while owners received taxes from the contracted merchants. A system of contracting the operation of fishing grounds and the management of Ainu to merchants was established in the early 18th century.

The Ainu people began to work under the Wajin for wages and purchased goods from the Wajin, which prevented the Ainu from practicing free trade with the Wajin.

This facility is open for the end of April to the beginning of November to provide information on Katsuyamadate Castle using miniature models and videos.

Matsumae Folding Screen designated a tangible cultural property by Hokkaido
An artwork from the mid-Edo period. The Matsumae Castle town of those days is depicted in detail on a screen measuring approximately 1.6 m high and approximately 3.7 m wide.
(Collection of the Matsumae Town Historical Museum)

In the Edo period, a physical distribution network connecting Ezochi and Osaka via the Sea of Japan using Kitamaebune cargo vessels was established. Kelp and other local products were exported from Ezochi, not only to Japan, but also to China via Nagasaki, Satsuma and Ryukyu. 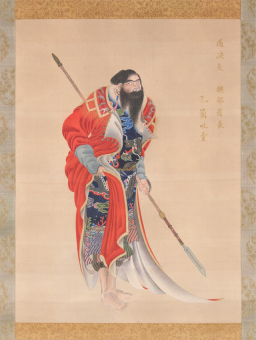 “Ikotoi” from Ishuretsuden
A masterpiece by Hakyo Kakizaki. He drew portraits of 12 Ainu chiefs under the order of the Matsumae domain lord Michihiro Matsumae.
(Collection of Hakodate City Central Library)

The shipping ports of Esashi, Matsumae and Hakodate, which were referred to as Matsumae Sanso, are said to have enjoyed greater prosperity than Edo. The prosperous towns are depicted on the Matsumae folding screen.

Many temples were built in the three port towns and Matsumae Castletown, and merchants and fishermen from Tsugaru and Shimokita moved to the towns to find work. The towns were influenced by the culture of the Kyoto and Osaka areas transported by the Kitamaebune cargo vessels.

In the 18th century, boiled and pressed herring was transported from Ezochi to Honshu and used as fertilizer to grow rice and commercial crops including Chinese indigo and cotton, and played a significant role in the development of industry during the Edo period.

Hakyo Kakizaki was a great painter of the era of the Matsumae domain. Having studied Maruyama school paintings established by Okyo Maruyama and Chinese Song Dynasty paintings, he left behind numerous works. Among his paintings, Ishuretsuzo is particularly famous.

In 1789 (the first year of the Kansei era), the Ainu people in eastern Hokkaido rose up in Kunashiri-Menashi to fight against the oppressive control of the trading posts by the Wajin. Ishuretsuzo is a series of portraits of local Ainu chiefs, and each painting is considered a masterpiece that depicts the pride of Ainu chiefs. 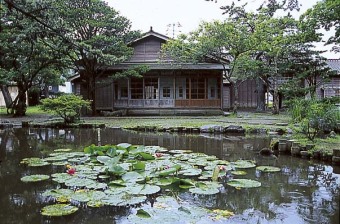 Former Sekikawa Family’s Vacation House designated a tangible cultural property by Esashi Town
A vacation house once owned by the Sekikawa family, considered the wealthiest merchant family in the Matsumae domain, reminds us of the prosperity merchants enjoyed in those days.
(Photo courtesy of Esashi Town) 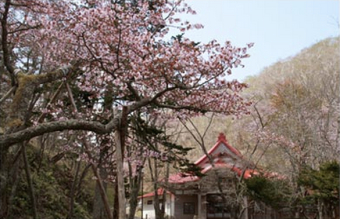 Kokutaiji Temple designated a historic site by the national government
The Tokugawa Shogunate that controlled eastern Ezochi directly, built this temple in Akkeshi, where the Kunashiri-Menashi Battle took place, in 1804 (the first year of the Bunka era) as a guardian god of the Kushiro area. This is one of the three government temples of Ezo.
(Photo courtesy of Akkeshi Town)

Another Kurofune (Black Ships): The End of the Edo Period in Ezochi 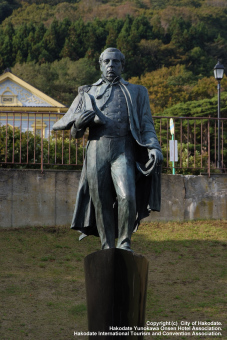 Memorial Statue of Commodore Perry’s Visitto Hakodate
Commodore Perry evaluated the port of Hakodate as one of the best ports in the world and reported that people in Hakodate lived comfortably and luxuriously (Narrative of the Expedition of an American Squadron to the China Seas and Japan). A statue of Perry waserected at the foot of Motomachi Park in Hakodate.
(Photo courtesy of Hakodate Official Travel Guide, Hokkaido, Japan)

Russia had been expanding its territory into Siberia since the late 16th century, and reached the coast of the Sea of Okhotsk in the mid-17th century. As Russia’s attempts to expand southward reached closer to Japan, the Tokugawa Shogunate began to pay close attention to the northern borders.

In 1792 (the fourth year of the Kansei era), Adam Laxman arrived in Nemuro and asked Japan to open trade with Russia. The shogunate refused this request. However, subsequent incidents with Russians, such as Nikolai Rezanov’s landing at Nagasaki in 1804 and the Golovnin Incident on Kunashiri Island in 1811 caused a tense relationship between Russia and Japan. Russia’s southward expansion resembled the arrival of the Kurofune (black ships) in the northern land.

Meanwhile, the shogunate decided to place Ezochi, including Chishima and Sakhalin, under its direct control to protect the northern borders and promote extensive exploration of Ezochi.

In 1798, Juzo Kondo put up a wooden sign stating “Dainihon Etorofu” on Etorofu Island to declare that the island was Japanese territory. He also established guard houses on each island south of Etorofu Island, and officials were stationed there. Tsugaru, Nambu, Sendai, Aizu and other clans in the Tohoku region were put in charge of guarding Ezochi.

An American East India Squadron commanded by Commodore Perry visited Japan and concluded the Japan-US Treaty of Peace and Amity with the shogunate, and Japan thus opened its ports of Shimoda and Hakodate. Perry also visited Hakodate, stayed there for 18 days and left many interesting stories. In Hakodate, a port that was opened to foreign countries, many foreign consulates, trading houses and churches were built. In addition, Goryokaku, the first Western-style fort in Japan, was constructed as the defense base of northern Japan.

As the Tokugawa Shogunate ended in 1867 (the third year of the Keio era), the Meiji Restoration took place. The following year, the former shogunate army led by Takeaki Enomoto who refused to surrender to the Meiji government landed on Washinoki (Mori Town) and occupied Hakodate and the surrounding areas. The battle of Hakodate, where Toshizo Hijikata, vice-commander of Shinsengumi, joined Enomoto’s army, ended in 1869 (the second year of the Meiji era) with a victory for the new Imperial troops. It was the beginning of an era of drastic changes. 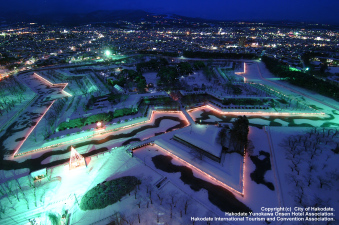 Goryokaku – a special historic site
Completed in 1864, Goryokaku was the political center of Ezochi. The site was renovated and presently serves as a historic park. Goryokaku is famous as a cherry blossom viewing spot in spring and its moat is lit up in winter.
(Photo courtesy of Hakodate City) 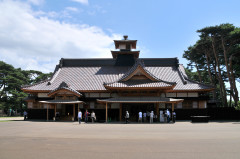 The Hakodate Magistrate’s Office in Goryokaku witnessed numerous historical scenes. One third of the entire building of the magistrate’s office was restored to their original appearance in 2010. This is a historic site located in Goryokaku Park. 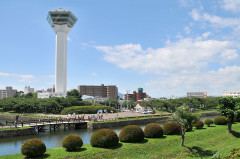 Commemorating the 100th anniversary of the construction of Goryokaku, the first tower (height: 60 m) was built in 1964. It was then rebuilt with a new design and a height of 107 m and opened in April 2006. From the observation deck, one can command a view of Mt. Hakodate, the Tsugaru Strait, the Yokotsu mountain range and Goryokaku.