(discovered at the Chobonaino site in Hakodate) 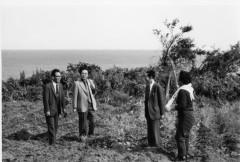 On-site investigation at the time of Kakku’s discovery (Agency for Cultural Affairs)
Ae Koita, who discovered the figurine, far right

It was in August 1975, approximately 40 years ago, that the hollow clay figurine, “Chuku-dogu” awoke from a long sleep.

In a field facing the Pacific in Chobonaino, Minamikayabe (currently Osatsube-cho, Hakodate City), a local housewife was tilling the land with a hoe to harvest potatoes when she struck something. At first, she thought it was a potato. She picked it up and wiped the mud off it. To her surprise, it was the head of a clay figure complete with nose and eyes. Her name is Ae Koita. It was the discovery of the National Treasure clay figurine that has affectionately been nicknamed “Kakku”.

An investigation by the Board of Education revealed that the figurine had been made in the latter half of the Late Jomon period (about 3,500 years ago). The figurine is hollow inside, which is called Chuku Dogu (hollow clay). It is the largest hollow clay figurine in Japan at a height of 41.5 cm and was designated an Important Cultural Property in 1979, four years after its discovery, because the remarkable figure is completely intact. 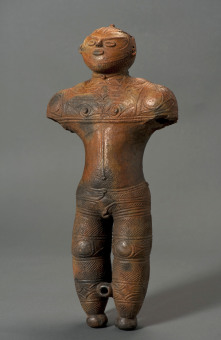 It has been regarded a National Treasure since it was discovered. However, at that time Minamikayabe Town did not have the facilities to display an Important Cultural Property. It is kept in the vault of the receiver general’s town government office after it has been put in a paulownia box inside a safety box, except when it was displayed at overseas exhibitions organized by Japan’s Agency for Cultural Affairs. It has not been removed for more than 30 years, which has led to some joking that it has been sentenced to 30 years imprisonment (The Japanese words for “safety box” and “sentenced to imprisonment” are both pronounced “kinko”).

For this reason the town gathered suggestions for a nickname for the clay figurine from the public to promote it. The supplementary prize was a year’s worth of locally produced Japanese kelp. More than 200 suggestions were submitted. Based on the selected results, the nickname was determined to be “Kakku (茅空),” which consists of two Japanese characters – one from Minamikayabe (南茅部), where it was discovered, and the other from the Japanese word for hollow clay figurine (中空土偶).

It was in March 2007, approximately 32 years after the discovery, that the nickname “Kakku” became widely known. The figurine was designated as a National Treasure and an interview with Ae Koita was published in a newspaper. In the interview she said, “Kakku, I am so glad that you got promotion” and a picture of her big smile was in the newspaper. She used the word “promotion” to express the upgrade from an Important Cultural Property to a National Treasure. Through the newspaper article I could see how important it is for her and that she treated Kakku like her own daughter. 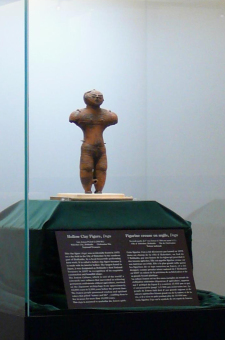 Kakku did an excellent job after its designation as a National Treasure.

Her first assignment was to “attend” the G8 Summit, which was held in Toya, Hokkaido in July 2008. It all started when Ikenobo Yasuko, then Senior Vice Minister of Education, Culture, Sports, Science and Technology, said, “I hope Kakku will attend the G8 summit.” while seeing the figurine at Hakodate City Museum. Since one of the themes of the summit was climate change and the environment, she seemed to think that it would be appropriate to have a representative of the Jomon people who lived in harmony with nature.

Coordination efforts by the Hokkaido Board of Education, Ministry of Foreign Affairs of Japan and Agency for Cultural Affairs made it possible for the figurine to attend the summit. The main problem was security in case the national treasure was displayed at the hotel hosting the summit and not a museum. However, as officials of the Agency for Cultural Affairs said that the hotel will be the safest place in Japan during the summit, display of the figurine was determined.

Kakku was exhibited in front of a venue for private meetings where all of the nation’ leaders were going to pass by. A display case was brought into the hotel on the day before the summit and was carefully set up. In front of Kakku, a message translated into English and French said, “In Japan, there was the Jomon culture that had survived for over 10,000 years in harmony with nature. These spirits have been passed down to the people of Japan today.”

The next morning after the three-day meeting I headed to the hotel from the Media Center to remove the figurine. When I arrived at the hotel, cleaning up of the hall had already started. The hall was filled with a festive atmosphere. In this atmosphere too, a lit-up Kakku was standing with intent. It seemed as if Kakku was sending out the written message with a serious atmosphere surrounding the figurine. I ran up to Kakku and said, “You did a great job. Thank you so much.” 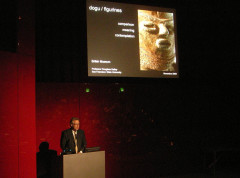 Soon after the G8 Summit, it was exhibited at the British Museum as part of “The Power of Dogu” held in December 2009. As the word “Dogu” was used in the title of the special exhibition, only Dogus (clay figurines) were exhibited. Visitors amounted to 120,000 who came to see the exhibition during the two months it was held. Since the international publication of research papers on clay figurines was scheduled, Dogu fans, including those from Hokkaido, set up a group tour to visit the UK. I also went to the UK to see Kakku.

As you know, it is allowed to take photographs inside the British Museum. I wanted to take a picture of the big moment. However, it was not allowed to take photographs inside the special exhibition room, apparently to comply with Japan’s policy. I was a little disappointed, but entered the exhibition hall. Kakku was surrounded by other famous clay figurines designated as National Treasures or Important Cultural Properties. Among them, it looked quite solemn and nervous.

During the exhibition, Kakku acted as a kind of Goodwill Ambassador to impart the importance of the Jomon culture. Now, it is standing quietly in Hakodate Jomon Culture Center. The room where it is displayed is lit in a way resembling moonlight to create the scenery of the Jomon period. I think Kakku can go back in time in this room.

Someday I want to impart the importance of the Jomon culture with Kakku again. 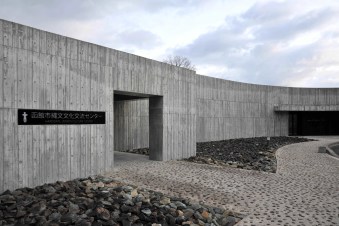 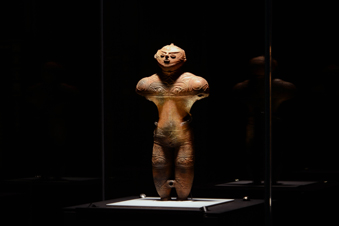