According to Ainu religion, spirits reside in all natural objects. Ainu regarded natural phenomena that are useful to human beings, including flora and fauna, as well as daily life necessities such as fire, water, living implements and forces beyond human control like the weather, as kamuy, and paid homage to them.

Ainu religion is based on the concept that this world is founded on interactions between humans and kamuy. This belief allowed earlier people who lived in a deep relation with nature,to obtain the things they need for their lives, and to acquire knowledge and skills to utilize those things, which served as measures against natural calamities and diseases.

Today, as in Japanese society at large, the Ainu live their lives according to various religious beliefs.
With the recent movement to restore and preserve the Ainu culture, however, interest in Ainu spiritual culture has increased. In recent years, Ainu beliefs and rituals have been taught in various places. Some traditional rituals have been restored, and some have been created newly.

This section highlights the traditions as understood by people born and raised between the Meiji era and the early Showa era. Ainu beliefs do not rely on any specific creeds or scriptures like the Christian Bible or the Buddhist Lotus Sutra (Hoke-kyo). In many regions, the manner in which rituals are conducted and awareness of kamuy are similar, but there are also variations to these understandings between some regions and individuals.

As seen with the traditional cultures of many other peoples too, Ainu consider it sacrilegious to talk about religion, or to listen to someone talk about it. Certain behaviors are prohibited, depending on the person’s age, gender and status.

Ideas of kamuy vary with regions and individuals. It has been commonly said that kamuy are fire, water, sun, moon, flora and fauna. Some kamuy are thought to cause diseases, earthquakes, thunder and other natural phenomena. In addition to these naturally occurring kamuy, man-made implements – boats, hearth hooks, mortar and mallets – are also believed to be kamuy. 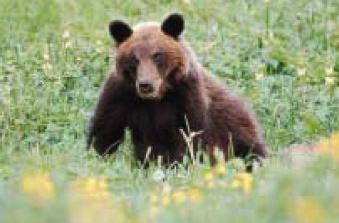 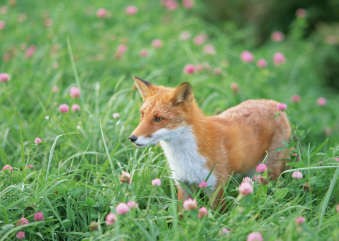 Kamuy who are beneficial to humans 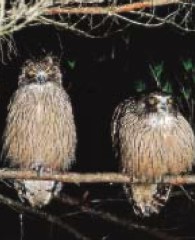 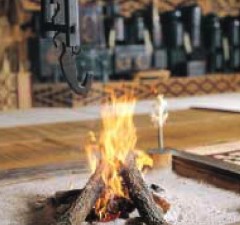 Fire burning in a hearth
(Photo courtesy of The Ainu Museum)

Other kamuy offer assistance beyond human ability. The kamuy of fire is deemed important and common. Fire provides humans with warmth and light, allows humans to cook raw ingredients and listens to humans’ appeals and wishes that have to be conveyed to other kamuy. In case their prayers are not sufficient to convey what they mean, kamuy play a role in covering the insufficiency.
The Blakiston’s fish owl is viewed as a kamuy whose role is to watch villages, and it is highly considered by the Ainu people. Some kamuy of plants have the power to keep evil spirits away.

Ainu believe that there are not only good kamuy who bring blessings to humans, but that there are also evil kamuy with bad powers whom humans cannot match coming to the human world. The purpose of the Smallpox-causing kamuy coming to human villages is to spread the deadly disease, and until the mission has been fulfilled, the kamuy never go back to their world. What is more, humans must treat destructive storms and thunder as kamuy with veneration.

Sending kamuy back to their world 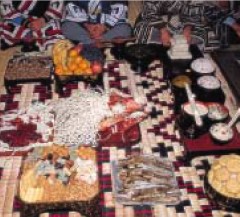 When their missions in the human world have been completed, kamuy return to their world where their families and friends wait.

At that time, humans pray for beneficial kamuy to visit again and send them back to their world by addressing gratitude and offerings such as a sacred shaved stick, home-brewed liquor, dumplings and dried salmon, all of which are supposed to delight kamuy. The kamuy that have received a prayer of gratitude then tell their families about the hospitality offered by humans. By doing so, other kamuy, as well as the said kamuy, supposedly wish to visit the human world where humans courteously worship them as kamuy.

In this way, the kamuy, after they have been courteously sent back to the world to which they originally belonged, become an even more venerable existence, commanding respect from their fellows. 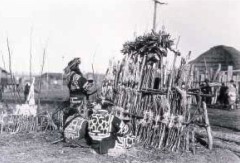 Whenever the Ainu wish to convey something to kamuy, such as requests or thanks, they pray. These prayers are offered in various forms from slight requests to prayers for the safety of the community as a whole.

Some prayers are offered during regular daily life and some are prayed on special occasions, such as the building of a boat or a house, while others are prayed in particular seasons, such as prayers asking for big fish catches and prayers offered as a token of gratitude. 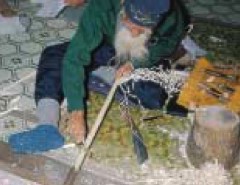 Ainu use various utensils when praying to kamuy. One such utensil is a sacred stick, which is made of willow or giant dogwood tree. The stripped surface of these trees is shaved with a knife and decorated with bunches of shavings. The sticks, varying in shape, are used for various purposes – as an offering to kamuy, as a tool to exorcize evil spirits,or as a symbol of kamuy to protect their houses. 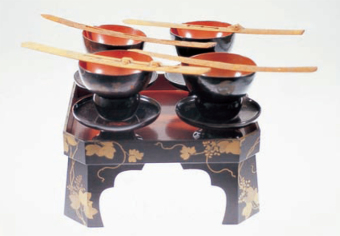 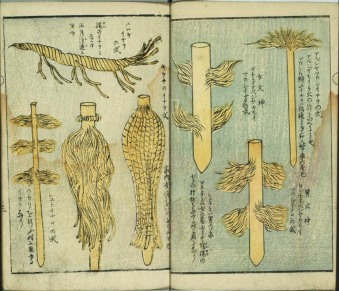 Prayers to kamuy are offered for various purposes. This section highlights several rituals.

Rituals for sending bear kamuy back to their world 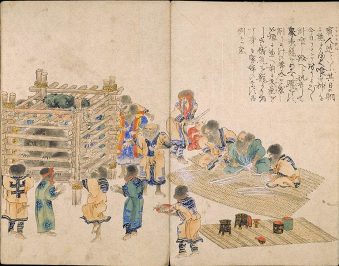 Ainu hunters returned the soul of captured bear kamuy to their world, right there on the spot where they were hunted, or the whole Ainu community sent the killed bear spirit back to its world at the village. When an adult bear captured during hibernation in early spring had a cub in its den, the cub was captured alive, and raised at the village for about two years before sending it to the kamuy world.

People in the village carefully nurture the cub and send it back to the kamuy world with many offerings in the hope that the bear kamuy would thank the people for their hospitality and visit the human world again. This rite is regarded as one of the particularly important kamuy spirit-sending ceremonies. Many people are invited from neighboring villages to celebrate it.

Some account of this ritual is sometimes depicted as follows: the ritual is performed to kill bears as a scapegoat that is offered to something, but this is not how the Ainu view the ritual at all.

Before the fishing season for salmon starts, Ainu pray for a big catch and at the end of the season they offer their gratitude for the catch.

Prayer to ward off epidemic kamuy

When an epidemic is likely to spread or has gone rampant, the Ainu pray (prayed) that the epidemic kamuy would stay away by putting herbs with a strong odor at the front door and windows, or in the garden. 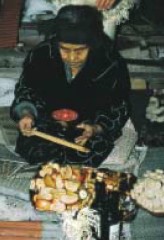 The Ainu prayed to the fire kamuy to deliver offerings to the posthumous world where their ancestors live. Crushed or broken snacks and fruit are offered, and torn tobacco is scattered. At such a time, if the names of the ancestors are not actually spoken, the offerings may apparently not be sent to them.