Where did our ancestors come from? It is believed that people first inhabited Hokkaido more than 30,000 years ago. Some people came from northern regions as far away as Siberia in pursuit of large game like mammoths. Others came from southern regions via the Korean Peninsula or from southern islands. They brought with them refined stone tool-making techniques and laid the foundation for Paleolithic culture in Hokkaido.

Arrival of Homo sapiens on the Japanese archipelago

Migratory routes of Homo sapiens and the estimated historical periods (Source: based on Jomonjin wa doko e itta ka? (Where did Jomon people go?) by Hisao Baba, 2013
Homo sapiens moved from Africa and spread worldwide while adapting to various local environments
*Click the image to enlarge it.

Our species, Homo sapiens, was born in Africa some 100,000 years ago.
These people began to migrate out of Africa from 60,000 to 50,000 years ago, and approximately 50,000 years ago they reached today’s Southeast Asia (the islands near Indonesia and the Indochina Peninsula had used to be part of the continent, and the region was known as Sundaland). Here, the population increased, and people obtained food not only on land, but also in the sea using boats. Before long, some migrated to the Australian Continent where they became the ancestors of present-day aborigines there. Other groups continued to migrate to China, Siberia, the Japanese archipelago and the American Continent as we know these regions now.
Some of these people reached the Japanese archipelago 70,000 to 60,000 years ago. Two separate groups are believed to have reached the Japanese archipelago: one from the north via Siberia and Sakhalin and the other from the south via the islands. Human migration to the Japanese archipelago occurred repeatedly. It is therefore believed that people with various physical features migrated to Japan and became our ancestors. 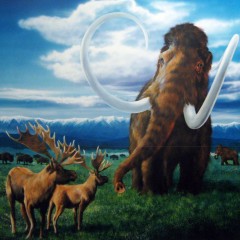 This is a conceptual drawing of Hokkaido during the Ice Age. Mammoths and other large and medium-sized animals lived on the grasslands. (Photo courtesy of the Obihiro Centennial City Museum)

The first traces of Homo sapiens in Hokkaido are from more than 30,000 years ago.

That was the so-called Ice Age, when sea levels dropped and land bridges appeared. Hokkaido was connected with the Eurasian Continent near the Soya Strait. Mammoths, bison, Naumann elephants, Irish elks and other large animals are believed to have inhabited the vast grasslands spreading across Hokkaido.

People in those days used chipped stone tools and migrated while subsisting on food obtained by fishing and hunting. This era is referred to as the Paleolithic period, and Paleolithic culture thrived until approximately 10,000 years ago. 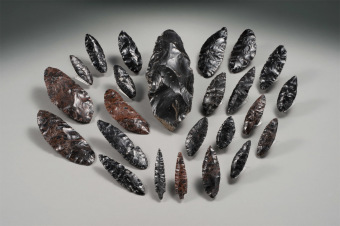 These stone tools unearthed from the Shirataki Sites had been produced using microblade technology. They had sophisticated stone tool production techniques in those days. They were collectively designated a National Important Cultural Property (Shirataki Educational Center collection, Engaru Town)

At the beginning of the Paleolithic period in Hokkaido, people used almost the same stone tools as those used on the main island of Honshu. Then, 20,000 to 12,000 years ago, microblades, a type of stone tool influenced by the continent, were introduced from Siberia via Sakhalin.

Microblades were produced by chipping and flaking stones to make them as sharp as razor blades. Made of obsidian (volcanic rock), they were inserted into a groove cut along the length of a bone or wood for use as blade tools like spears and swords. Microblades were convenient tools for hunting and fishing because they could be produced in large numbers and could easily be used for various purposes. The microblade production technique is believed to have helped to broaden the scope of daily living and other activities of people in those days.

The remains of a workplace producing a large amount of microblades were found at the Shirataki Sites located in Engaru Town in northeastern Hokkaido. This region is home to Mt. Akaishi, which boasts six billion tons of obsidian reserves, and is known as one of the largest obsidian deposits in Japan. Approximately seven million pieces including stone tools and fragments from the process of stone tool-making as well as other objects have been unearthed from numerous Paleolithic archaeological sites identified in the town’s Shirataki area.

The techniques that had been used to produce the microblades found here are named after the region where they flourished, such as the Shirataki technique and the Yubetsu technique. These microblade producing techniques spread across northeastern Asia, and obsidian tools produced in Shirataki have even been discovered in faraway places on the continent.

Paleolithic sites in Hokkaido – Hokkaido has countless archaeological sites from the Paleolithic period.

Experiencing the “Home of Obsidian” in the Paleolithic period 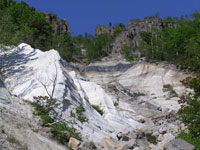 The Shirataki Sites are located in the basins of the Yubetsu River and its tributaries in the Shirataki area of Engaru Town. The region is famous for the largest obsidian deposits in Japan and a wide array of archaeological sites from the late Paleolithic period. Shirataki Geopark provides opportunities to obtain obsidian-related information and to experience the nature, history and culture of this area.

Excavation of the oldest stone tool in Hokkaido 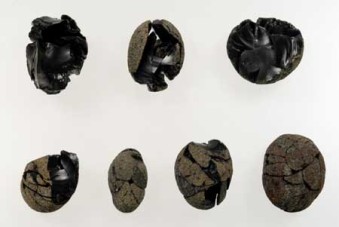 Numerous archaeological finds have been unearthed at this site during roadworks (for a prefectural road) in 2001 and 2002. These include approximately 9,700 Paleolithic stone tools, around 56,000 pieces of pottery and other artifacts from the early to middle Jomon period, and the remains of dwellings. Carbon dating revealed that the unearthed obsidian tool is from approximately 30,000 years ago – the oldest known such tool in Hokkaido as of today 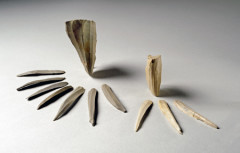 This huge archaeological site from the Paleolithic period was discovered during dam construction in 1978. It has yielded as many as around 200,000 stone tools. Since these finds came from only 1% of the total site area, it is believed that there are still vast amounts of stone tools. Pirika Paleolithic Culture Museum offers hands-on stone tool-making activities. 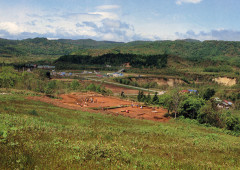 Pottery use and the beginning of the Jomon culture 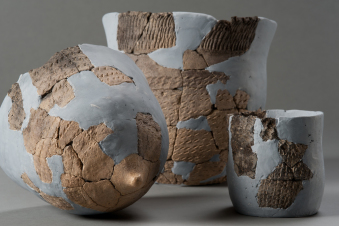 The oldest pottery in Hokkaido was unearthed from the Taisho 3 Site. It is decorated with fingernail-like impressions (tsumegatamon), which is characteristic of pottery from the incipient Jomon period. (photo courtesy: Obihiro Centennial City Museum)

On the Japanese archipelago, mammoths and other large animals had gone extinct, and coniferous forests were gradually being replaced by broadleaved stands. In the warmer climate, acorns, chestnuts and walnuts were abundant in lush forests across the archipelago, and the landforms after the sea-level rise created favorable environments for fish and shellfish. As a result, people in those days could obtain food both on land and in the sea.

About this time, the Jomon culture was born on the Japanese archipelago.

The most salient feature of Jomon culture is the invention of pottery. People used pottery containers to process and store food, thus attaining stability in their daily lives. Pottery unearthed from the Odai Yamamoto 1 Site in Aomori Prefecture is the oldest found in Japan. It dates to approximately 16,000 years ago, the so-called incipient Jomon period – a transition period from Paleolithic to Jomon cultures.

The oldest pottery in Hokkaido was unearthed at the Taisho 3 Site in Obihiro. It dates to approximately 13,000 years ago and is characteristic of pottery from the incipient Jomon period. It is believed to have been introduced to Hokkaido by people from the main island of Honshu.

Finding of the oldest pottery in Hokkaido

Archaeological sites from the Jomon period were found during high-standard highway construction in 2003. Sites No. 1 through No. 8 are situated on the left bank of the Tobetsu River. Pottery unearthed from the Taisho 3 Site was the oldest ever found in Hokkaido. The unearthed artifacts are exhibited at the Obihiro Centennial City Museum.