The Prayers and Hearts of the Jomon People

We are surprised by the great variety, technical skills involved and beauty of artifacts of the Jomon culture. From a modern point of view, some artifacts are very lovely and humorous. How did the Jomon people use these artifacts? How did they feel when making the clay figurines and the clay tablets? The Jomon people’s spiritual world grew through many generations as they lived in coexistence with nature. Numerous artifacts quietly tell us this history. 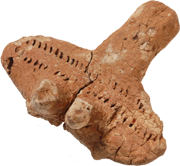 Even now, we have a “culture” of believing that gods of various kinds, such as big trees in the woods, mountains, the sea and other natural phenomena, both bring blessings and do bad things. There is not only one great god, but many gods. It may be the best to say that many spirits exist.

This kind of idea has existed since the Jomon period as can be seen in the existence of places where offerings were made to gods, such as graves, shell middens and earthwork mounds. And this idea of the relationship between nature and human beings has been passed on until now. 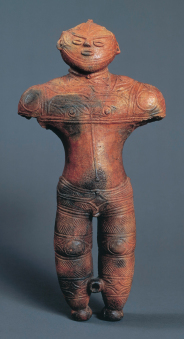 Clay figurines are one of the symbols that indicate the spirituality of the Jomon people.
Why did they make clay figurines?

Although there are various views on the reason, such as goddesses, spirits, magic, symbols of death and regeneration and substitutes for sickness, it is yet unsure. However, it is sure that the clay figurines expressed the spirits of prayers of the Jomon people who always faced natural phenomena, including birth, death and things in life worth living for. The patterns designed on pottery and clay figurines are also an expression of their prayers.
Clay figurines discovered in Hokkaido have distinctive characteristics depending on the period when they were made. 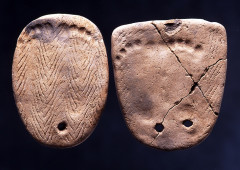 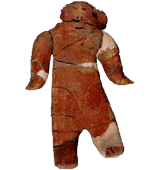 More than 30 artifacts excavated from sites have been gathered here.

This is the annex of the Obihiro Centennial City Museum established to keep, display and utilize the pottery and stone tools unearthed during excavations at sites in Obihiro. Artifacts unearthed at the Taisho Sites are also collected and displayed here with the exception of some artifacts. Many unique exhibitions, such as the “trend of arrowheads” and the “toolbox of the Jomon people,” have been organized in the museum, and the materials with accompanying explanations can be observed.

Collection of clay figurines discovered at the easternmost site in Japan

At this museum approximately 30,000 materials focused on the history and nature of Nemuro have been collected. Clay figurines unearthed at the Hatsutaushi 20 Site represent those discovered at the easternmost site in Japan, and measure over 20 cm. They are unique-shaped clay figurines with both hands and legs turned up.

Changes in the Jomon society and wonderful tools

Approximately 4,000 years ago, the climate changed as warm weather was replaced by cooler weather.

It is considered that the coastline regressed and that populations of large-scale villages gradually decreased.

Pottery and stone rods have been unearthed from such places. It is considered that the people might have used prayers and created festivals in association with the changes in society. 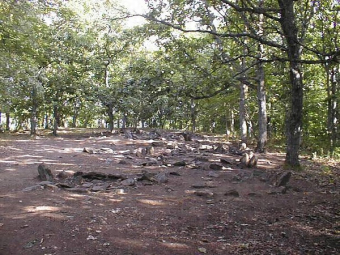 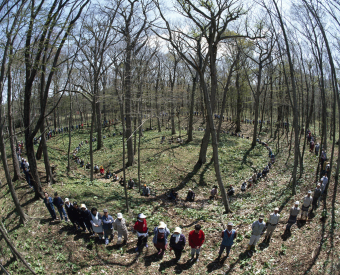 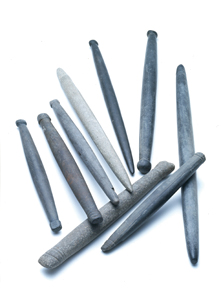 Stone rods unearthed at the Chitose City Bibi 4 Site
These stone rods are 30 to 70 cm long. Older rods have knobs at both ends while newer ones either have a knob on one side or no knobs. (Photo courtesy of Hokkaido Archaeological Operations Center) 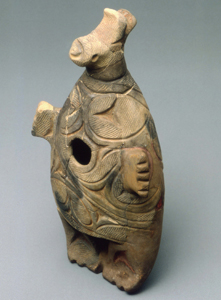 Animal-shaped clay figure excavated at the Chitose City Bibi 4 Site
This clay figure might have been modeled after a turtle, bird, seal, fur seal or some other animal, but it may be better to consider it an imaginary animal. It is called “Bibi-chan” after its lovely shape and the name of the site. (Photo courtesy of Hokkaido Archaeological Operations Center) 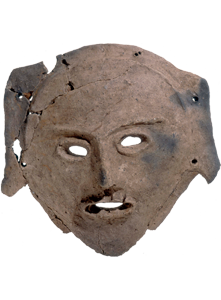 Clay mask unearthed at the Chitose City Mamachi Site
This clay mask with eye and mouth openings can actually be placed on the face. It realistically shows the facial characteristics of Jomon people.
(Photo courtesy of Hokkaido Archaeological Operations Center, Agency for Cultural Affairs collection)

Impressive materials, such as clay masks and animal-shaped clay figures as well as various kinds of tools, including stone rods, and stripped soil layers of shell middens, are displayed in the center. Lecture meetings and archeology classes are also held.

At graves dating approximately 3,000 years back at the Karinba Site in Eniwa, vermilion-lacquered combs and many ornaments were discovered.

Although lacquer was used from the early Jomon period, the people of this period had high technology. The color was produced using powdered red iron oxide, known as Bengala, and was applied to pottery, wooden artifacts, ornaments and various other items. Jomon people seem to have associated Bengala with prayers for life, because it was sprinkled at graves and on bodies.

Various kinds of accessories, such as pierced earrings, necklaces and bracelets, were also discovered at the sites from the Jomon period. They were made of soil as well as jade, amber, shells and the horns and bones of animals. It is considered that the Jomon people wore the accessories not only for fashion but also as prayers.
Large jade beads and other special accessories were presumably owned by village leaders. Jade is thought to have been valuable due to the difficulty to process it, and the fact that it was brought by trade all the way from where it had been produced in the Itoigawa area of Niigata Prefecture. 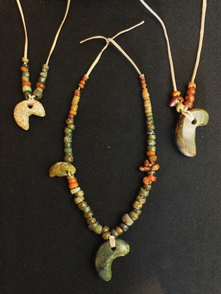 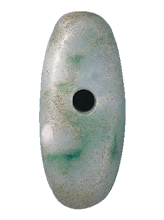 Large jade beads unearthed at the Funadomari Site in Rebun
The jade was produced in the Itoigawa area of Niigata Prefecture. This necklace was worn by a man buried in a grave in the Funadomari Site. (Rebun Town Board of Education collection) 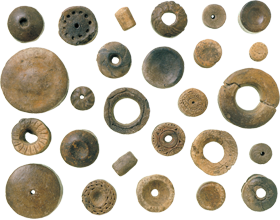 Clay earrings excavated at the Moheji Site in Hokuto
Like today’s pierced earrings, these were used as ornaments during the Jomon period. (National Museum of Japanese History collection) 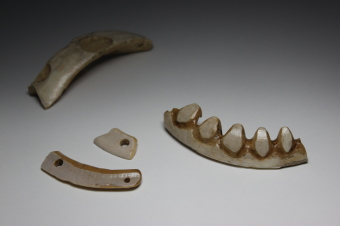 Boar tusk ornaments excavated at the Irie-Takasago Shell Midden in Toyako Town
These ornaments were made of the tusks of boars that are not indigenous to Hokkaido. They were modeled after the line of teeth of human beings. (Toyako Town Board of Education collection) 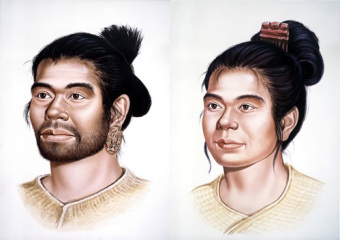 Conceptual illustration of a Jomon man
Jomon people are considered to have used various burial accessories for both men and women. (Illustration by Reiko Ishii)

Many beautiful burial goods discovered at the Karinba Site are displayed.

Various kinds of materials, including many burial goods, such as lacquered combs, headdresses, and earrings unearthed at the Karinba Site, as well as materials from approximately 7,000 years ago covering the Jomon, post-Jomon and Satsumon cultures when Eniwa’s first residents were living there, are displayed here.