Approximately 2,000 years ago, the Yayoi culture, which was characterized by rice cultivation and the art of making ironware, spread from western Japan to the Tohoku region. However, the Yayoi culture did not reach Hokkaido, where the Jomon culture developed into the post-Jomon culture.
Since the Hokkaido residents at the time had active exchanges with people from other regions, their culture was not only affected by the Yayoi culture from the south, but also the cultures of Sakhalin and the continent to the north, and developed into a culture unique to Hokkaido.

Rice cultivation that did not arrive in Hokkaido 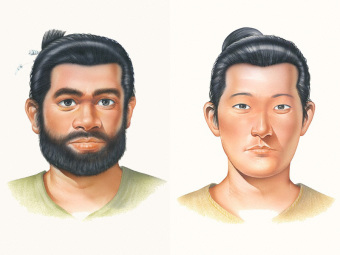 Reconstructed faces of Jomon (left) and Yayoi (right) men
Compared with the Jomon man, the Yayoi man has a longer and flatter face with a shorter nose, thicker single-edged eyelids, thin eyebrows and beard, and round eye sockets.
(Source: IPA’s website on educational material images)

From the end of the Jomon era, people with rice cultivation skills started arriving in western Japan from across the sea. They brought the agricultural culture of rice-paddy cultivation from around the Yangtze River.

The people of the Yayoi culture used Yayoi pottery without any patterns as well as bronze, iron and other metal tools. Approximately 2,500 years ago, the Yayoi culture spread across Honshu (the main island of Japan), and lead to the end of the Jomon culture. However, the Jomon people learned rice cultivation from the Yayoi people and became a mixed race, which is regarded as the ancestors of the current Japanese. It is known that more people in the Kanto and Tohoku regions inherited DNA from Jomon people at that time than in western Japan.

In the Tohoku region, the Yayoi culture declined even after the rice cultivation spread, and some people gave up farming to return to hunting and gathering. Yayoi pottery pieces with a pattern have also been found, showing the influence of Jomon culture. This Yayoi culture did not reach Hokkaido, where rice was not cultivated.

People in Hokkaido continued to use Jomon pottery with a pattern, and adopted the Jomon traditions and lifestyle. In addition, through trading with Honshu, people also obtained ironware and other metal tools that were not part of the Jomon culture, and these helped to develop their hunting, fishing and gathering skills. This culture, which continued from approximately 2,500 years ago up to the 7th century, is called the post-Jomon culture.

Pot with frog design unearthed at the Nishitake Site in Nakashibetsu Town
This is a very rare pot with a frog design from the early post-Jomon era. It measures 49.5 cm in height and the diameter of the mouth is 36.7 cm (Nakashibetsu Municipal Folk Museum collection). 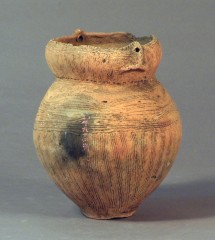 Deep Esan-type pot
Esan pot from the first half of the post-Jomon era. Notches are seen on the lip area, and the entire pot is covered with geometrical lines and a striped rope pattern.
(Hokkaido Museum collection).

At the beginning of the post-Jomon era, different cultures were also found in the southwest and northeast of Hokkaido.

In the southwest, people used Esan-type pottery, named after Esan (Hakodate City) in southern Hokkaido, and their culture is called Esan culture. In Esan culture areas, many shell middens with fish hooks and harpoons have been found. This suggests that the culture depended on fishing. Bracelets made of cone shells from the southern seas have also been found at the Usu-Moshiri Site, indicating exchanges with southern Honshu. In the northeast, different pottery than in southern Hokkaido was used, and amber beads were among the burial goods.
Approximately 4,000 amber beads for necklaces (largest number in Hokkaido) have been found at the Takisato-Yasui Site in Ashibetsu City. Some amber found in northern Hokkaido is believed to have come from Sakhalin, indicating exchanges with northern areas.

In the latter half of the post-Jomon era, Kohoku-type pottery was spread all over Hokkaido, and then to the Tohoku and Niigata regions. It is thought that the post-Jomon culture spread to northern Tohoku at that time.

Line drawings that were carved in rock somewhere between the first and fourth centuries have been found in Fugoppe Cave in Yoichi Town. Drawings found in Temiya Cave, Otaru City were once considered to be ancient characters, but now we believe they are also the same type of line drawings. It is still unknown where this culture of carving drawings in rock came from.

Exchanges between Esan and Yayoi

This site dating to the late Jomon to post-Jomon eras was found on Moshiri Island in Usu Bay. The site covers an entire islet with an area of approximately 10,000m², where bracelets made of cone shells from the southern seas have been unearthed from post-Jomon graves, indicating actual exchanges with the Yayoi culture. Unearthed artifacts are on display at Jomon Art Gallery in Date City Memorial Hall. 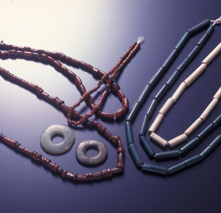 Jasper cylindrical beads, etc. unearthed at the Moto-ebetsu 1 Site
The Moto-ebetsu 1 Site is a post-Jomon culture site with graves on the north and south sides. A total of 41 hole-shaped graves have been found with 3,669 burial goods including jasper and amber beads.
(Ebetsu City Historical Museum collection) 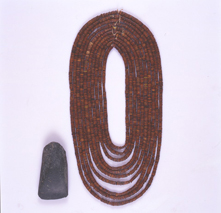 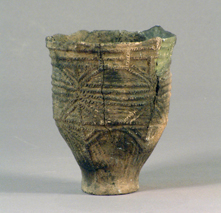 Deep Kohoku-type pot
Kohoku-type pottery from the latter half of the post-Jomon era. The pattern is made of horizontal raised lines, a pierced fingernail-shaped pattern and a belt-like rope pattern
(Hokkaido Museum collection) 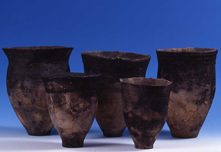 Kohoku-type pottery and Ebetsu-type (Ebetsubuto-type) pottery unearthed from the Ebetsubuto Site
Kohoku-type pottery is also called Ebetsu-type pottery. The Ebetsubuto Site is from the post-Jomon period, and many artifacts, including deep pots, wooden plates and other containers, ornamental hairpins made of deer horns, amber beads and other accessories, fishing tools, and stone knives used to cut up animals hunted for food and to carve wood, have been found here.
(Ebetsu City Historical Museum collection) 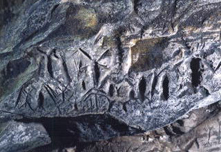 Line drawing carved on rock unearthed in Fugoppe Cave
This drawing is thought to represent a shaman
(Photo courtesy of Yoichi Town). 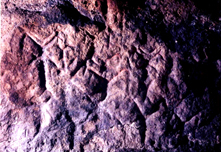 Person with horns: line drawing carved in rock unearthed in Temiya Cave
This is also thought to represent a shaman, which is characterized by horns.
(Photo courtesy of Otaru City).

More than 200 mysterious drawings on the walls

Fugoppe Cave dates back to the post-Jomon era of 2,000 to 1,500 years ago. The cave is approximately 5 m deep and high, and more than 200 line drawings are carved in the rocks. The drawings represent costume-clad people, boats, fish, marine animals and four-footed animals, and indicate that this might have been a religious place where rituals were performed. A conservation facility has been constructed here, and Kohoku-type pottery unearthed from the cave is exhibited.

Discovered approximately 150 years ago, and has been a source of much research

Temiya Cave was discovered in 1866, and investigations by many researchers revealed that it dates back to the post-Jomon period approximately 1,600 years ago. People with horns and a stick-like object or square masks as well as four-footed animals are depicted. The actual drawings are open to the public at the Temiya Cavern Preservation Center.