In the late post-Jomon years, the Okhotsk culture spread from Sakhalin (Karafuto) to the area along the Sea of Okhotsk in Hokkaido and the Kurile Islands. At the same time, the Satsumon culture, a culture unique to Hokkaido influenced by culture in Honshu, took root following the post-Jomon culture. Movement of people and goods from the north and south increased, and helped to create the ethos of the subsequent Ainu culture. 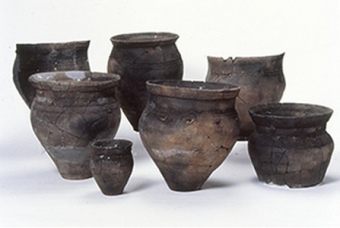 In the fifth century, people with a significantly different culture than that of Hokkaido residents moved from Sakhalin (Karafuto) to the area along the Sea of Okhotsk in Hokkaido. This is called the Okhotsk culture.

This Okhotsk culture also spread to the area along the Sea of Japan, and its remains have even been found on Okushiri Island in southern Hokkaido.

However, although remains of the Okhotsk culture have been found in the area along the Sea of Okhotsk, such remains have not been found in inland areas. These people are also called “marine people.”

The people of the Okhotsk culture were engaged in fishing and hunting of whales, seals and other marine animals, they kept dogs and pigs, and traded with people from the continent and Honshu (the main island of Japan). They also established settlements in coastal areas, and lived in pentagonal or hexagonal pit dwellings, some of which were very large, measuring over 10 m in length. It is thought that more than 15 people lived together in such a large dwelling. 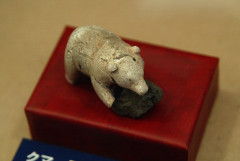 Carved bear figure unearthed from the Tokorochashi Trace Remains
This figure represents an entire detailed bear. It is thought that bears were treated as special animals in the Okhotsk culture
(Tokoro Ruins Forest collection)

Ornaments on belts, nephrite, small bells and Japanese spears have been found at Okhotsk culture sites. These are similar to those found at Mohe culture (4th – 9th centuries) and Tongren culture (5th – 10th centuries) sites in the middle and downstream basin of the Amur River (Heilong Jiang).

This indicates that the Okhotsk culture was involved in trade and other exchanges with Sakhalin (Karafuto) and the continent. 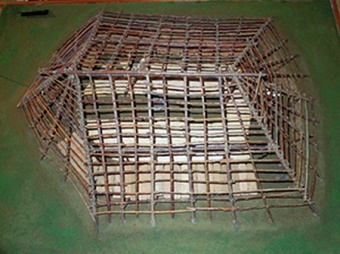 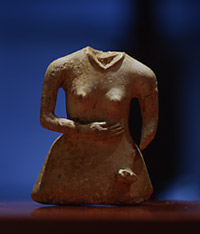 Female figure made of tusk from Moyoro Shell Mound
Approximately 10 ivory sculptures, which are unique to the Okhotsk culture, have been found in Hokkaido
(Hokkaido Museum of Northern Peoples collection). 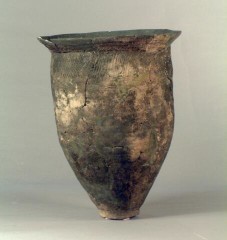 Satsumon pottery
This piece of pottery is from the latter half of the Satsumon period. The surface had been finished by scraping it with a wooden spatula
(Hokkaido Museum collection).

Under the influence of the Honshu culture, Jomon pottery and stoneware were replaced with earthenware like Haji pottery in Honshu and ironware.

This culture is called Satsumon culture, and continued through the 7th to 12th centuries. Satsumon people lived in square pit dwellings with a cooking stove, which were also found in Honshu during the same period. In the 8th century, the people established settlements near estuaries, where they caught salmon and trout, gathered wild plants, and cultivated foxtail millet, millet and barley.

During this period, Hokkaido was actively engaged in exchanges with the Tohoku region and was influenced by it. Ironware obtained through trade rapidly spread, and stoneware was no longer in use. Smithery skills involved in the processing of the iron were also imported.

In Ebetsu City and Eniwa City, Makki Kofun (ancient burial mounds) reminiscent of those in the Tohoku region have been found, and contained such burial goods as ironware from Honshu. 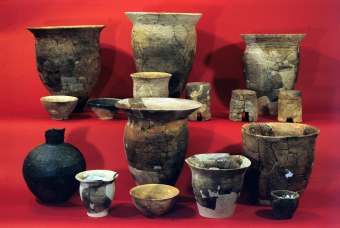 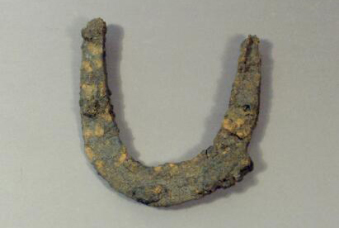 Tip of an iron spade
The tip of an iron spade: it has a blade on the outside and a groove on the inside. This is an example of the pieces of ironware that had been brought from Honshu
(Hokkaido Museum collection). 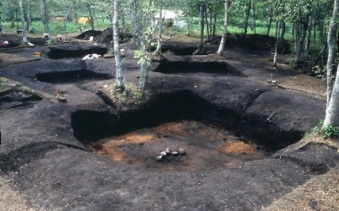 Pit dwelling remains at the Ichani Karikariusu Site (1980 excavations)
This is the largest settlement from the Satsumon period, and 2,549 dwellings have been found
(Photo courtesy of Shibetsu Pogawa Historical Place Forest Park). 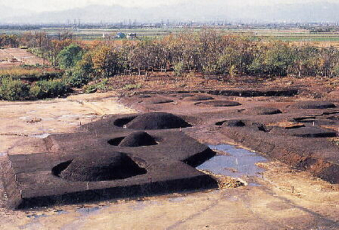 Meeting between northern and southern cultures, which led to the Ainu culture 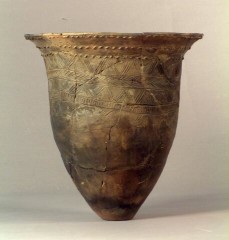 Tobinitai pottery
This piece of pottery incorporates the characteristics of both Satsumon and Okhotsk-type pottery in terms of shape and pattern. The pottery is called Tobinitai, because it was unearthed in the Tobinitai area of Urausu Town
(Hokkaido Museum collection).

In the 10th century, after the Okhotsk culture had ended, pottery showing characteristics of both the Okhotsk culture and the Satsumon culture was created. This pottery style is called Tobinitai pottery. The dwellings also had characteristics of both cultures. Remains have not only been found in coastal areas, but also in inland riverside areas like the Satsumon culture.

In the 13th and 14th centuries, Japanese people began to live in southern Hokkaido. Chinaware and iron pots spread to Hokkaido, and earthenware was no longer being made. Pit dwellings were replaced by flat-land dwellings, and fireplaces were used instead of cooking stoves. The Satsumon culture changed into the Ainu culture.

In this way, the culture of Hokkaido was affected by other area’s cultures through trade and other exchanges with people from the north and the south.

Museums providing more information about the Okhotsk and Satsumon cultures

Moyoro Shell Mound is located at the mouth of the Abashiri River, and represents a settlement of the Okhotsk culture dating to approximately 1,300 years ago. This museum features exhibits showing the life of the Moyoro people under the themes of housing, graves and shell mounds. Visitors can learn details of the Okhotsk culture including their high-level navigation, marine animal hunting and fishing skills.

Base for research on northern peoples

This is a rare museum in the world that features exhibits of the food, clothing and housing as well as spiritual cultures of northern peoples, such as the Ainu, Nivkh, Yakut, Aleut and Inuit, all of whom live in northern areas. Exhibits on the lifestyle, religious, rituals and mysteries of the Okhotsk culture are also on display.

Experience the town of ruins

The Tokoro Ruins Forest is a vast deciduous woodland featuring Daimyo oak and Japanese oak trees, and a historical park encompassing settlement remains from the Jomon, post-Jomon and Satsumon periods. Situated around the forest are Tokoro Iseki-no-Yakata (Tokoro Ruins Museum), the Tokoro Buried Cultural Treasure Center, and the Tokoro Museum of the University of Tokyo Faculty of Letters, where excavated materials are on display.

Compilation of research on the Okhotsk culture by Hokkaido University

This museum on the campus of Hokkaido University houses and exhibits a collection of archaeological materials from the five major Okhotsk culture sites (Kabukai 1 Site and Motochi Site on Rebun Island, Onkoromanai Site in Wakkanai City, Menashidomari Site in Esashi Town, and Moyoro Shell Mound in Abashiri City).

Remains from the Satsumon age in Sapporo

This center exhibits cultural remains in Sapporo and materials from the Paleolithic, Jomon, post-Jomon, Satsumon and Ainu periods.

The Pogawa Historical Place Forest Park is comprised of three sections: an entrance area that includes a folk museum and a historic village; the Shibetsu Wetland, where marsh plants bloom; and the Ichani Karikariusu Site, a national historic site showing the footsteps of humankind over a course of approximately 10,000 years. It is a vast outdoor museum where the history, culture and nature of the area around Shiretoko merge into one.