The cultural assets that the Ainu people have created and passed on include the tradition of oral literature that was developed in various forms and styles. Compared to the reading of written literature texts, such oral literature has a richness of artistry and entertainment for the audience who then transmits the traditions to the following generations.

In contrast to written literature, even performances of the same tales characteristically vary greatly depending on the reciter, the occasion, the timing of the performance, the specific recitation technique as well as the expressions generated ad lib during the recitation and performance.

Ainu oral literature is performed using different styles of recitation. Some tales are sung to melodies while others are recited in a relative monotone voice similar to ordinary speech, and the content of the folklore tales varies greatly.
Ainu oral literature in which stories are related is broadly divided into three general categories, namely “heroic epics”, “mythic epics” and “prose tales.” 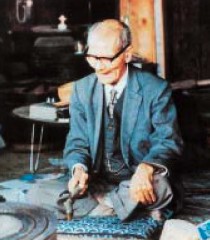 Heroic epics, yukar are also called sakorbe in one region and hawki in another region.The main text is sung to a short repetitive melody.

Each reciter has his or her own melody. Even though the reciters have memorized the tale by listening to others, they may perform using their own personal melodies, and the melody might shift to another melody in the middle of the recitation.

The reciter and the listeners tap out the time by beating blocks of hand-held wood while seated. The listeners, and occasionally the reciter as well, interject short, rhythmical exclamations at certain points of story development in the song.
The heroic epics are usually long, lasting a few hours or even longer, although some are as short as several minutes.

Well-known epics include tales concerning a young boy with the superhuman ability of flying in the sky, diving into the sea and cleaving his way under the earth. His life, adventures, courtships and battles are narrated in the first person. In such stories as these, vignettes of heroes’ everyday lives are also presented. These include, for instance, a battle scene depicted over and over in fiery and passionate language, which can cause the hands to sweat. The heroic epics are characterized by many spectacular, stirring and thrilling stories.

However, not all of these tales fall into the category of heroic stories from the viewpoint of content. Some are about a married couple who led a discontented life while they were young, but who eventually learned to live happily together.

Mythic epics are called kamuy yukar and oyna, and the main text is sung to a short, roughly defined, repetitive melody for each story.

The mythic epics are characterized by persistently repeated refrains that are uttered between the lines. Choruses are specifically connected with each tale, as shown in the story of the white-bellied green-pigeon kamuy in which the refrain, waori, appears, and the story of the Blakiston’s fish owl kamuy in which the refrain, fum fum kat is used. The refrains that are inserted may differ even in tales with more or less the same content if they are narrated by different reciters who live in different regions.

One may speculate that these refrains, in many cases, are onomatopoeic, featuring the sound of the cry of the kamuy, the leading character of some stories, and the meanings of these refrains are often not understood.

To recite the tales takes from as short as a few minutes to more than an hour depending on the individual tale.

Concerning the content, the mythic epics mostly depict kamuy of all sorts including kamuy of fauna and flora, and thunder or illness. They appear as speakers using first person narration, introducing vignettes of their experiences in the world of kamuy as well as in the world of human beings. These tales teach people the proper mindset and attitude with which they should be prepared to handle animals, plants and natural phenomena.

According to Ainu belief, a spirit is believed to dwell within every single being. Ainu people have faithfully worshiped kamuy in reference to most things that are deeply involved in their daily lives. This includes fauna, flora, fire, water and utensils for daily use, as well as natural phenomena and other forces that are beyond human control.

The term kamuy is often translated into Kami (God) or Hotoke (Buddha) in Japanese, yet the Ainu word for god is not necessarily identical to the Japanese counterpart in its semantic context.

Yukie Chiri (1903 – 1922), known as an author of Ainu Shinyosyu (collection of mythic epics in the Ainu language), was the first Ainu to express Ainu tales in written form. She was highly regarded for that, and many people were impressed by the preface of the book, beginning “In the old days, this vast Hokkaido used to be a land of freedom of our ancestors,” followed by “The day will come when the Ainu will be able to live in harmony with the changing world.”

In 2010, Chiri Yukie Gin-no-Shizuku Memorial Museum was established at the place where she was born and spent her childhood with contributions of more than 2,500 people. Gin-no-Shizuku (silver drops) derives from a passage of the owl kamuy story included in Ainu Shinyoshu–silver drops fall around, golden drops fall around. Concerts are annually held on her birthday in June, and Ainu culture seminars and other activities are also held. 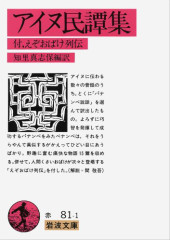 Prose tales are called uepeker or tuitak. The texts of the tales in this category are recited in prosaic diction which is close to that used in everyday conversation, in a relative monotone, although some are spoken with emphasis on distinct parts. Some tales are as short as ten minutes while others may last a few hours.

Based on the content, prose tales are characterized by a rich variety of heroes and heroines as well as many synopses. The leading roles in some tales are given to human beings who speak about their own experiences and their relations with kamuy, but in other stories kamuy speak of their own experiences and the content is very similar to that of mythic epics. Superhuman boys appear as leading characters in some tales as in the heroic epics.

Many tales in which human beings play leading roles seem to be highly educational, teaching people the attitudes and values they should embrace. The characters ultimately lead happy lives after having overcome hardships and dangers of all sorts, while humans and kamuy with an evil nature are punished.

Besides the tales cited above, there are some tales that are designed to transmit to the following generations, such as the events of historic importance to their own community, as well as the experiences of their closely related predecessors. These are also spoken in the same recitation manner as prose tales.

One of the prose tales tells about two leading characters – penanpe and pananpe – who imitated the example of a neighbor who became successful and wealthy, only to fail themselves. This book features these kinds of prose tales, containing the romanized Ainu language original text and the Japanese translation.

This center has a library information room and a practical training room for preservation, both of which are adjacent to a permanent exhibition room. Those who are interested in the Ainu culture can watch oral literature through images recorded at the Ainu Culture Festival (organized by Hokkaido Utari Association) at the library information room. Prior appointment is required.

In the kamuy corner, one of the exhibition zones, visitors can appreciate some of the Ainu oral literature that has been passed on in Biratori Town.

In this museum, visitors can listen to CDs created by Shigeru Kayano, a former curator.

In this center, visitors can learn about the traditional culture and history of the Ainu people through books, videos and sound documents.

In this museum, one kind of Ainu oral literature, orspe anu ro, is performed in front of a hearth in Cise (house) at 14:45 on the 2nd and 4th Saturdays every month.

In the digital picture-card show of old tales corner, visitors can enjoy watching old Ainu tales through the original sound with subtitles in Japanese and the Ainu language.

In this center, visitors can consult books and watch videos on the Ainu oral literature. A program for the public, kiroroan is also held from 19:00 to 20:30 on the third Friday of every month.

In this museum, one can listen to two mythic epics that have primarily been passed on in Chitose City and some songs through video equipment installed in the 5th exhibition room and in the “Video Box” corner.

In this museum, one can watch video recordings of ethnic cultures in the world, including around 30 programs related to the Ainu culture, including four pieces of oral literature such as sakorpe by Kuro Yae, old tales on Sakhalin Ainu and ifunke.